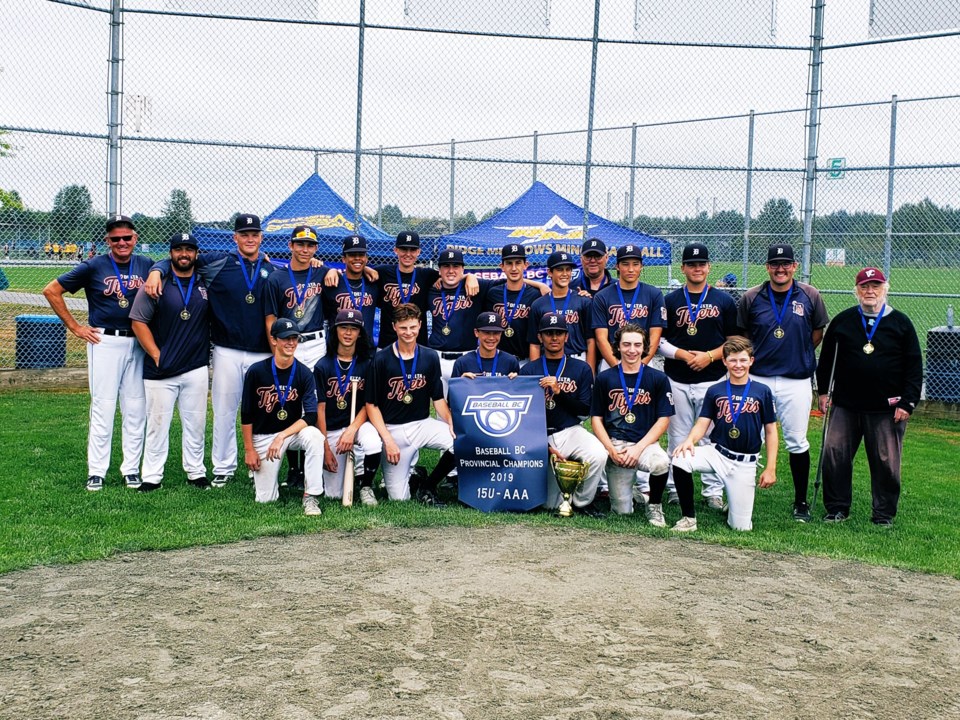 The Delta Tigers are Baseball BC Bantam AAA champions after a 3-2 win over the Coquitlam Reds on Sunday afternoon in Maple Ridge.Courtesy Delta Tigers

The Delta Tigers are Baseball BC Bantam AAA champions after a 3-2 win over the Coquitlam Reds on Sunday afternoon in Maple Ridge.

With the win at the national qualifying tournament, the Tigers are now off to the national championships in Oshawa, Ont.

Head coach Cam Frick said the team is thrilled after the weekend.

“Lots of tight baseball games, but really played well. It was a team effort. We got lots of contributions from everyone throughout the weekend,” said Frick.

This was a tournament that Delta had yet to win, so that was extra satisfaction for the long-time Tigers skipper.

“We’ve had a good run the past five years and I’m really excited for the kids, the rest of coaching staff to have trip to nationals,” he said.

They opened with a 3-0 win over White Rock on Thursday, beat Langley 6-1 on Friday and the UBC Thunder 21-4 on Saturday to finish atop their pool.

A Will Anderson bunt scored Kenny Scott to open the scoring followed by two-run homer by Cassie.

It was a total team effort in game two over Langley with Carson Latimer pitching four innings of one hit shut-out ball, followed by Heppner who allowed one run on two hits over his three innings.

Swaim pitched a five-hitter in the big win over UBC.

Heppner went three for three with a double and four RBIs, Cassie blasted a three-run homer, Scott had a double and three RBIs, while Yonatan Marom had two RBIs.

Cassie and Latimer pitched great allowing only two hits, while Jadon Nager had a clutch RBI sixth in the sixth to take the lead.

The Tigers will leave for nationals on Aug. 20 with the tournament starting on Aug. 22. It will feature 10 teams with the top five teams, including Delta, in one round-robin pool and the lower five teams in the other round-robin group. The top three teams from the top pool and top two teams from the bottom pool will then advance to a playoff round.

“I think we have a good chance,” said Frick. “We just confirmed our three pick-ups, so I’m excited by all three guys and they will help us out. I haven’t followed it too closely, but I have been told by other coaches in our league that B.C. hasn’t won in Bantam AAA at nationals since before I was born. It’s normally dominated by Ontario and Quebec, but I think we can give it a good run.