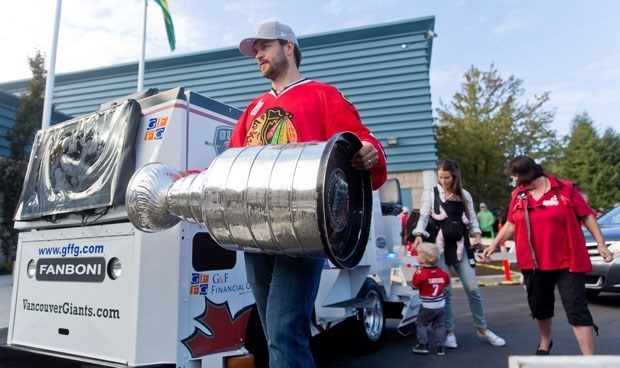 Tsawwassen's Brent Seabrook has announced his retirement following 15 seasons with the Chicago Blackhawks. Twice he brought the Stanley Cup back to his hometown for a city hosted celebration. Optimist file

It's the end of a playing career for the most decorated hockey player ever to come out of Delta.

Tsawwassen’s own Brent Seabrook has stepped away from the game following 15 seasons as a member of the Chicago Blackhawks. The 35-year-old was attempting to return from recent surgeries.

“Over a three-month period from December 2019 to February 2020, Brent underwent successful surgeries on both of his hips and his right shoulder,” said Blackhawks team physician Dr. Michael Terry. “He has worked extremely hard to recover from those surgeries but has a long-term issue with his right hip that is preventing him from playing professional hockey.

“We have tried all available conservative treatments, and nothing has worked well enough for him to live life as an athlete. We support his decision to prioritize his long-term physical health.”

Seabrook’s career with the Blackhawks included being a three-time Stanley Cup winner. On two of those occasions he was honoured with a parade in his hometown by the City of Delta. He was also a member of Canada’s Olympic gold medal team at the 2010 Winter Games in Vancouver.

The South Delta Minor Hockey Association product helped the Delta Ice Hawks win their first-ever Pacific Junior Hockey League title in 2001 when a limited number of 15-year-olds were allowed to play junior “B.” He led the PJHL playoffs in scoring that year and was named the league’s rookie of the year.

He went on to play for Lethbridge of the Western Hockey League before being selected 14th overall by the Blackhawks in 2003 NHL Entry Draft. He also won gold for Canada at the World Junior Championships.

“I am so proud to have played my entire 15-year National Hockey League career in Chicago with the Blackhawks,” said Seabrook in a written statement.

“It was an honor to play the game that I love, with teammates I love, in front of fans I love, in a city that my family and I have grown to love.

“After several surgeries, countless hours of rehab and training to get back on the ice at the level of my expectations, it will not be possible for me to continue playing hockey. This is what is best for me and my family.

“The love and support of my wife, Dayna, and my kids, Carter, Kenzie and Dylan has meant everything to me. My parents, Gary and Suzanne, and my brother Keith, have been behind me every step of the way and are my foundation.

“I'm thankful for all that the Blackhawks have done for me and my career. This organization drafted me as an 18-year-old kid out of western Canada and this team became my family away from home. In addition, I'm thankful for the Blackhawks medical and training staff for always putting me in the best position to succeed on the ice. Over the past 15 years, I've played with and for some incredible teammates and coaches. I thank each and every one of you. It was an honor to wear the Blackhawks sweater and go to battle with you night in and night out. I loved being your teammate.”