The Canucks top prospect and captain of Team Russia took ownership for his team's fourth-place finish.
Jan 6, 2021 9:59 AM By: Daniel Wagner 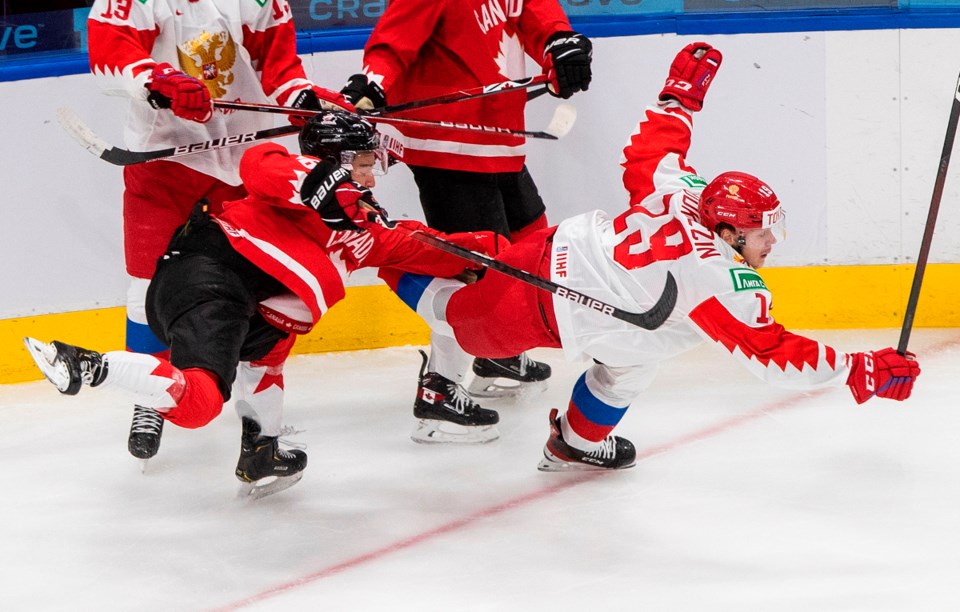 There are likely a lot of Russian hockey fans that are disappointed with their country's fourth-place finish at the 2021 World Junior Championships. There may even be some Canucks fans disappointed that the team's top prospect, Vasily Podkolzin, didn't put up more points.

No one could possibly be more disappointed, however, than Podkolzin himself.

The captain of Team Russia looked devastated after his team fell 4-1 to Finland in the bronze medal game and he took ownership for the team's performance, posting an apology on his Instagram.

Here is Podkolzin's post run through Google Translate for the benefit of those Pass it to Bulis readers that cannot read Russian:

"First of all, I would like to apologize for the result. I really want the guys who will be after us to succeed. And we will draw conclusions and will be stronger, wiser. Thank you very much for your support to the fans who are always with us. Just thank you."

The irony is that Podkolzin is one of the Russian players with the least to apologize for. In the team's final two games — the semifinal against Canada and the bronze medal game against Finland — Podkolzin was clearly the team's best player and sometimes looked like the only player that truly cared they were trailing.

A team player to a fault, Podkolzin seemed to pick up on this toward the end of the game against Canada, and attempted some individual efforts to try to will Russia into a comeback. Against Finland, it seemed he was about to do the same while down 2-1 in the third period, only to get an incredibly unlucky double minor for high sticking when a collision with his own teammate sent his stick into the face of a Finnish player.

In both games, Podkolzin could be seen on the bench during timeouts, imploring his teammates to pour as much of themselves into the game as he already was.

Russian head coach Igor Larionov was content to let Podkolzin do all the talking in these moments, trusting that the message would mean more coming from their peer than their coach.

For all of Podkolzin's efforts, he couldn't get on the scoresheet. That's partly because of the defensive efforts of Canada and Finland, but also because of great performances by two goaltenders: Devon Levi for Canada and Kari Piiroinen for Finland. Levi led the tournament with a .964 save percentage and three shutouts, one of them against Russia, while Piiroinen was at his best in the bronze medal game, stopping 28 of 29 shots.

It didn't help that Podkolzin only got 16:21 in ice time in the bronze medal game, a surprising coaching decision given he was so clearly the best player for Russia. That 16:21 was still good for third among Russian forwards in ice time, as Larionov spread the ice time relatively evenly across his four lines. Even Podkolzin's double minor wouldn't explain that kind of ice time: it just seemed that Larionov didn't want to ride his best players in the biggest game of the tournament.

Podkolzin finished the tournament with just 4 points in 7 games, but Canucks fans that watched the games got a better picture of why scouts are so high on the winger. His effort every game was unimpeachable and his vision and playmaking stood out, as he threaded passes through traffic to create chances. He played a style of game that looked immediately translatable to the NHL.

It's too bad that he'll have to return to the KHL instead to complete his season with SKA St. Petersburg. He won't be available to sign with the Canucks until SKA gets knocked out of the KHL playoffs — even then, there's a possibility that he won't be available until after the 2021 World Hockey Championship, if that tournament gets played.

Vasily Podkolzin's 3-point first period carries Russia over Austria, but what is World Junior production worth?
Dec 30, 2020 11:41 AM

Vasili, Vasily, or Vasiliy — However it's spelled, Podkolzin should be the Canucks’ next Russian star
Nov 25, 2020 2:25 PM
Comments

686
City of Delta replacing annual spring clean-up
389
'Do not make plans,' warns Henry in plea to stem Family Day travel
244
Letters: Closure of Delta Hospice is a tragedy for community
241
Safety prompts Delta to install no parking signs near Brunswick Point Trail
239
COVID-19 outbreak over at The Waterford