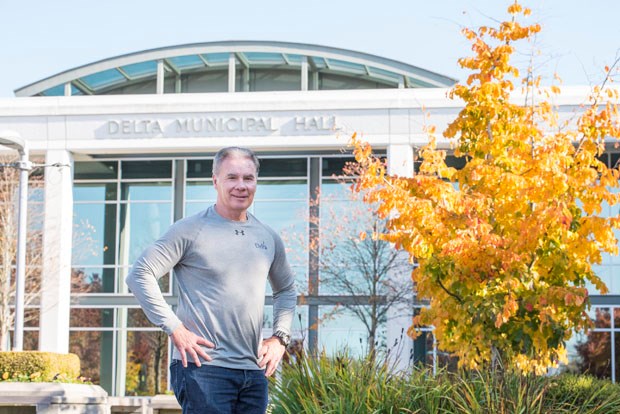 Incoming mayor George Harvie has a 90-day implementation plan that he will discuss with council.Adrian MacNair

Delta council is about to enter the George Harvie era.

After a heated civic election campaign, the former city manager emerged the winner last Saturday as he took the mayor’s seat with almost 40 per cent of the vote, helped largely by a powerful showing in North Delta.

Four members of his Achieving For Delta slate were elected to Delta council and another three to the Delta board of education. Six of the top eight vote getters in the council race were members of his ticket.

In an interview with the Optimist this week, Harvie, who had just completed a busy day removing his campaign signs, credited the incredibly hard work of all his candidates and volunteers who knew the best way to reach people was by pounding the pavement and knocking on as many doors as possible. Thanks to the good weather, they were able to reach many households, he said.

“I wasn’t too surprised but very pleased with the result but our feedback at the doors, and we knocked on thousands and thousands of doors, showed really strong support for us. We also took the time to explain our platform, including Delta Families First, like every other meeting of council in North Delta and school board, and I thought we were resonating very well with people,” Harvie said.

“We’ve had a really great team. We had super chemistry amongst us and during an election you’ll have your highs and your lows, but when you saw one of your team members at a low, we’d be there to support that person. Collectively we made this happen. It wasn’t one individual, it was all about the team and the strength of the team who all went out door knocking. At the times people couldn’t door knock, they did other things, so there was total contribution from everyone.”

As far as taking part in a political campaign after spending almost two decades as city hall’s top staffer and advisor to council, Harvie said he knew what to expect and what was expected of him.

“Having Mayor (Lois) Jackson there too was a great support for our team members who haven’t gone through this before. I managed to maintain my running and my fitness which helped me insofar as keeping my endurance up, so everything worked out really well,” he explained.

As far as priorities for his new council, Harvie noted it starts with his 90-day implementation plan that he will discuss with council.

Harvie would also like to see his Delta Families First policy implemented. He said people have been telling him the current three-day window for Delta residents to register first for civic programs simply isn’t enough, so he’d like to see that expanded to two weeks.

He said he also heard concerns about the number of people outside of Delta using recreation centres that are subsidized by Delta taxpayers.

“It’s from Surrey, from Tsawwassen First Nations which is growing rapidly, and Richmond. We want to ensure there’s a rate for Delta taxpayers and a separate outside rate. Delta taxpayers shouldn’t be paying the entire operational costs for a facility that is widely used by others outside Delta.”

Among the other issues Harvie plans to tackle is housing by working with local builders and identifying opportunities for development in town centres. Scott Road, in particular, is an area that can start making a difference “right away,” according to the mayor-elect.

A Tsawwassen resident, Harvie came from the City of Burnaby to be Delta’s chief administrative officer in 2002.

Saturday’s election saw Harvie win big in North Delta where he was more than 2,000 votes ahead of former police chief Jim Cessford, his nearest competitor. Harvie won Tsawwassen by 79 votes, while he was 349 votes behind Cessford in Ladner.

Voter turnout was 43.3 per cent, up considerably from four years ago.

The inaugural meeting of the new council will be Monday, Nov. 5.