BANGKOK — Authorities in Thailand are imposing fines of up to 20,000 baht ($640) for people who fail to wear face masks in public in 48 provinces, as the government struggles to cope with a new wave of coronavirus cases that is straining the medical
Apr 26, 2021 6:02 AM By: Canadian Press 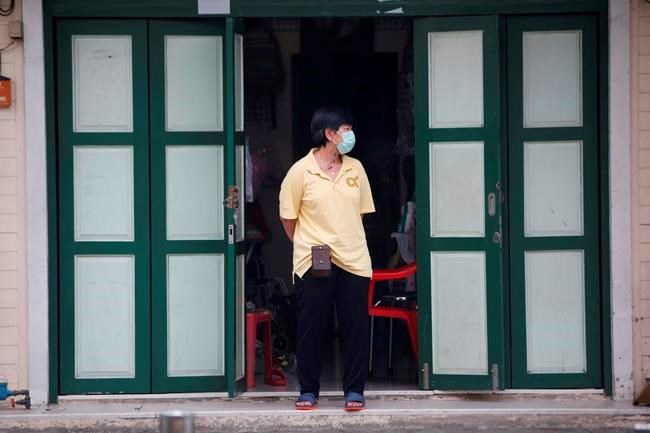 BANGKOK — Authorities in Thailand are imposing fines of up to 20,000 baht ($640) for people who fail to wear face masks in public in 48 provinces, as the government struggles to cope with a new wave of coronavirus cases that is straining the medical system.

The capital, Bangkok, which has the largest number of cases, is also closing more than 30 types of businesses and services, including cinemas, parks, zoos, bars, pools and massage . Gatherings of more than 20 people are banned. Shopping malls and department stores may continue operating, but with abbreviated hours.

Despite rapidly rising numbers, there currently are no nationwide lockdowns, curfews or travel bans, though individual provinces have been allowed to issue their own restrictions, including mandatory quarantines for visitors from other provinces. Forty-eight of the 76 provinces have imposed fines for not wearing face masks.

Prime Minister Prayuth Chan-ocha was among the first to be fined for the on Monday, when the rule took effect in Bangkok. A photo on his official Facebook page showed him maskless as he chaired a meeting about COVID-19 vaccinations, drawing criticism online.

The city’s governor, Aswin Kwanmuang, said he, the city police chief and another officer went to collect a 6,000 baht ($190) fine from Prayuth, since it was his his first under rule. The incriminating photo was deleted from the prime minister’s account.

Health authorities on Monday announced 2.048 new infections and eight new deaths, the fourth day in a row with more than 2,000 new cases. That brought the country's totals to 57,508 cases and 148 fatalities.

The high number of cases has created shortages of hospital beds and intensive care units. It has also underlined the government's failure to obtain adequate supplies of vaccines. Less than 2% of Thailand’s 69 million people have been vaccinated.

Thailand has struggled to cope with the new outbreak, which originated in March in nightspots in and around Bangkok, as Prayuth's government has been reluctant to impose harsh restrictions that would further hurt businesses already battered by the pandemic.

Apisamai Srirangsan, a spokeswoman for the national Center for COVID-19 Situation Administration, said the government on Thursday will discuss whether to impose additional measures in some areas, including the country’s two major cities, Bangkok and Chiang Mai.

Apisamai said finding beds for everyone who tests positive is a problem but the government will stick with its policy of having all patients placed under medical supervision. She said the government is adding more beds to hospitals and setting up more field hospitals, including at stadiums in Bangkok that have been turned into primary care places for patients awaiting spots in hospitals.

Thailand has also banned the entry of visitors from India, with the exception of its own citizens. The ban, to take effect May 1, was announced Monday by the Thai Embassy in New Delhi as India sets daily global records for new infections.

Thai citizens seeking to return home will be allowed in on repatriation flights.