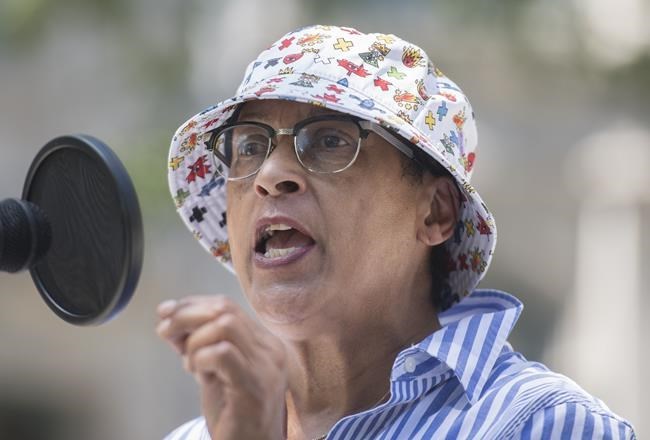 Marlene Jennings, president of the Quebec Community Groups Network, told reporters her organization analyzed the 100-page bill and found that it seeks to modify 24 provincial statutes as well as the Constitution Act of 1867.

Bill 96, she said, is the "most sweeping use of human rights overrides in the history of Quebec and Canada."

Jennings said the government's pre-emptive use of the notwithstanding clause to shield the bill from certain constitutional challenges creates a "charter-free zone" involving a wide array of interactions between citizens and the province. The bill goes beyond language, touching on commerce, employment, education, access to public services and even the justice system.

"Whereas rights that would otherwise be protected are infringed, the courts will not be able to review and remedy the conduct … " Jennings said. The provincial legislature would instead become the arbiter in such cases, she added.

"Here's the question we need to ask over and over and over: Why does protecting the French language require the blanket suspension of human rights? The way we see it, it really doesn't," Jennings said.

The legislation, tabled in May, is a major reform to the province's signature language law, known as Bill 101. The government has said the goal of Bill 96 is to affirm that French is the province's only official language and the common language of the Quebec nation.

But unilaterally changing the Canadian Constitution to affirm that Quebec is a nation and that French is its official language is a red flag, Jennings said, noting Bill 96 doesn't identify who belongs to that nation.

Jennings said her group has urged federal Justice Minister David Lametti to ask the Supreme Court of Canada to study the constitutionality of Bill 96.

Among the measures included in Bill 96 are tougher sign laws and stronger language requirements for businesses, including those in federally regulated industries. Other provisions would cap enrolment at English junior colleges and grant new powers to the French-language watchdog.

Jennings said the 12 to 18 months before the legislation was tabled included trial balloons and leaks that had the English community fearing the worst, so when Bill 96 was tabled, it didn't create a splash.

"If I'm alarmist because I'm worried that Bill 96 creates a charter-free zone where my individual rights and freedoms are suspended with no justification, no explanation, then call me an alarmist," Jennings said.

On Thursday, Premier François Legault said the government will hear from the population on Bill 96 in the coming months about possible adjustments, but he thinks there's a consensus around the legislation. "We think it's a balanced bill, but we will be open to consult the population," Legault said.

"We use the notwithstanding clause to make sure there is one common language in Quebec, but the rights of the anglophone community for education and health-care services will still be respected."

This report by The Canadian Press was first published June 10, 2021.