TORONTO — Early in Episode 1 of "Anyone's Game," Tony McIntyre talks about the growth he'd seen in Matthew-Alexander Moncrieffe, an explosive six-foot-seven wing who arrived at Orangeville Prep as a raw 13-year-old. "M.A.
Jan 14, 2021 9:37 AM By: Canadian Press 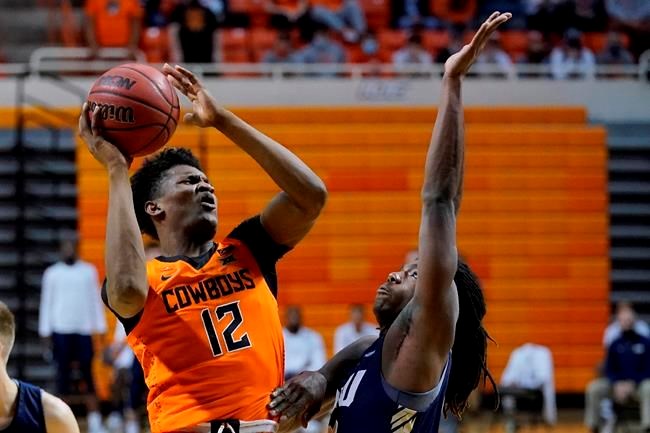 TORONTO — Early in Episode 1 of "Anyone's Game," Tony McIntyre talks about the growth he'd seen in Matthew-Alexander Moncrieffe, an explosive six-foot-seven wing who arrived at Orangeville Prep as a raw 13-year-old.

"M.A. came in here, and in terms of maturity level, on a scale of zero to 10? Below zero," McIntyre says.

The comment said everything about McIntyre's philosophy. It's about more than developing great basketball players, but helping them become solid young men as well.

Orangeville Prep plays out of the Athlete Institute, an hour's drive north of Toronto and founded in 2010 by Jesse Tipping as a way of keeping Canada's top players home for high school rather than moving to the U.S.

Once considered a hidden gem, seven Orangeville grads have been drafted into the NBA. The most famous: Denver Nuggets star Jamal Murray.

McIntyre is Orangeville's burly head coach, and a program Day 1er. After seeing his own sons Tyler, Dylan and Brandon Ennis leave home to play basketball, he was an easy sell.

"My kids did very well going to U.S. prep schools, but I also felt like I didn't play an important enough role as a father. I missed out on that," McIntyre said. "If we were able to still give them the schedule and the exposure, but let them go home on weekends, we felt that was the best formula for Canadian kids."

Hamilton and his crew spent countless days over the better part of a year with Orangeville Prep, whose goal was to win The Grind Session, an elite high school circuit, plus secure as many college scholarships as possible. The program sees about seven grads a season go on to play NCAA Div. 1 basketball.

Moncrieffe is in his rookie season at Oklahoma State.

"I (still) talk to him literally every single day," McIntyre said. "We watch video after every game."

Shemar Rathan-Mayes, a freshman guard at Youngstown State in Ohio, said far more than his game grew in his four years at the Athlete Institute.

"Anybody that's been there can tell you that as a person, you mature, and they teach us life lessons and how to be good people in society," said the 19-year-old from Toronto, who led Orangeville to an 86-4 record. "Coach Tony, coach Brandon (Ennis), coach Manny (Dosanjh), they're basketball coaches, but they're also like big brothers to us.

"When we're travelling on the road, if we lose a game, it's never just about basketball, they teach us how to grow outside of that, and I think that's what makes Athlete Institute so different from other places. It's not just basketball. They care about us as people."

The series is an intimate look at the daily grind of a young player. In the opening episode, the team works out in the darkness of an early morning. You can see the players' breath in the cold. They're illuminated by a car's headlights.

"It's a good representation of what these kids go through chasing that dream," McIntyre said. "We did over 27,000 kilometres on the season in a car to tournaments. We played over 55 games. We went undefeated in Canada, we lost in the quarter-finals in the US National Championship.

"So, we had a great, great season. I only wish (the film crew) could have been there for every second of every minute."

In addition to The Grind Session, Orangeville Prep plays in the OSBA, a league of Ontario prep programs.

Hamilton - who produced and directed "Nash," about former NBA all-star and Brooklyn coach Steve Nash - said the buy-in and the mutual respect among players and coaches was impressive.

"A million per cent," he said. "It's respect for others, and vice-versa respect for your coaches but then also the coaches' respect for the players, right? There is a reciprocal feeling on that team and everything was: 'Yes, sir. No, sir.' That was so cool to see that these guys all bought in and that's what Tony wanted. He instilled that."

They're lessons that transcend sports.

"Basketball is incidental, man," Hamilton said. "I played my whole life, and without basketball, I wouldn't be the person I am today. The confidence and the ability to go on to do what I do now. They'll take so many cool lessons from the sport."

McIntyre said he'll know he's been successful if an Orangeville Prep grad comes back to take his job one day.

"It's not how much money they make in the NBA or anything, it's how much are they willing to give back to the next generation of kids and allow them to experience and hopefully have even a better experience than what they got with me," he said.

The six-part series, which debuts Friday on CBC and CBC Gem, was produced by Kyle McCutcheon and Jack Sussman. McIntyre has watched it three times already.

"I watched it the other night and I turned to my wife (Suzette Ennis), and told her the one thing I walked away with is knowing these guys are going to be able to show this to their children, like, 'Hey, look, I was in a TV show, look at what I went through, look at how great this team was, and look at what a bond you can build with a group of guys and utilizing basketball to do that.'"