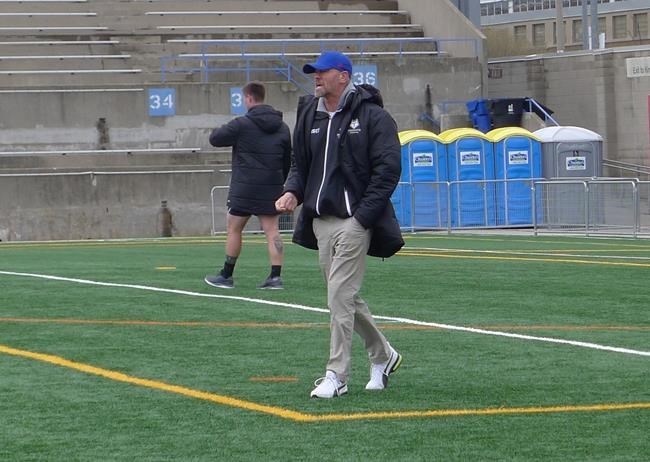 For McDermott, it's a chance to repay local fans after the transatlantic rugby league team was unable to play at home during its short foray into Super League last year. Toronto played just six away games in the English top tier before the pandemic ground the game to a halt — and the North American side was unable to finish out the season because of financial issues.

"I suppose if you want to call it closure, for them and for me, and for players and staff, whoever, there's a bit of that," McDermott, speaking Thursday from England, said of the game he wants to stage.

He also sees it as another chance to show off rugby league in Toronto — "and to showcase what (the) Toronto Wolfpack could have been."

Given the current state of the pandemic, it's a project for further down the line. McDermott has no date yet in 2021 but hopes the game could pit available former Wolfpack players against opposition to be named later.

"I don't know who we'll play but I want the team to be relevant," he said of the opposing side

He hopes a portion of the proceeds from the game can go to help develop Canadian rugby league talent.

The Wolfpack last played in Toronto on Oct. 5, 2019, when they won promotion to the Super League with a 24-6 win over Featherstone Rovers in the Million Pound Game before an announced sellout crowd of 9,974 — a team record — at Lamport Stadium.

McDermott, who joined Toronto in November 2018, is currently looking for a job. He signed a five-year contract extension with the Wolfpack in November 2019 and is hoping to come to a settlement with majority owner David Argyle.

"I'm certainly not expecting the pot to be huge," he said.

The coach is not part of the deal that Argyle has struck with the GMB union, pending final approval by the players and other staff. The Wolfpack paycheques stopped June 10 with the club standing down July 20, saying it could not afford to play out the remainder of the pandemic-interrupted season.

"Let's hope over the next six weeks we all get a little bit of something," McDermott said.

Toronto's bid for reinstatement in 2021 under new ownership was voted down Nov. 2. Leigh Centurions were subsequently chosen to replace the Wolfpack in the 12-team top tier.

The 50-year-old McDermott is one of rugby league's most successful coaches.

He won four Grand Finals, two Challenge Cups, a League Leaders' Shield and a World Club Challenge with Leeds Rhinos prior to being let go in July 2018. He previously coached London Broncos and the U.S. national team, priding himself on developing young talent.

McDermott had hoped to do the same with the Wolfpack but said the franchise was "consumed with the obsession of getting into Super League." He says if he could do it over, he would ensure more attention was paid to developing the sport at the grassroots.

The Ottawa Aces are slated to start life in England's third tier in 2022, having delayed their start by one year due to COVID-19. Team chairman Eric Perez, who founded the Wolfpack, has said he wants to incorporate more domestic talent into the Aces.