One day in, Chris Armas already feeling right at home as head coach of Toronto FC 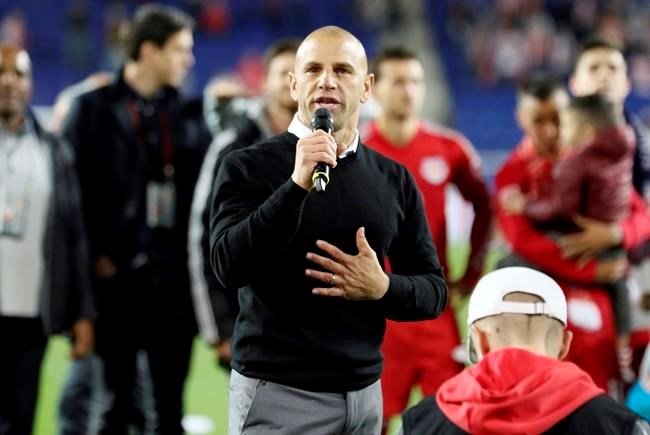 TORONTO — One day into the job and new Toronto FC coach Chris Armas is already feeling right at home.

The former New York Red Bulls boss has extensive ties to his new club. Toronto GM Ali Curtis was sporting director at the Red Bulls while Armas was an assistant coach prior to getting the top job there.

Back in the early '90s, Armas played for Puerto Rico alongside current Toronto president Bill Manning. Both men spent time in the USL with Armas at the Long Island Rough Riders and Manning — who went on to become the Rough Riders GM prior to working in MLS — at the New York Fever.

And Armas has known Michel Bradley since the Toronto FC captain was a pre-teen. Bradley's father Bob coached Armas and the Chicago Fire when the expansion team won the MLS title in its inaugural season in 1998.

The 48-year-old Armas succeeds Greg Vanney, who stepped down Dec. 1 after more than six years at the MLS club. Vanney subsequently was named head coach of the Los Angeles Galaxy.

Armas' introduction via Zoom call Thursday was essentially a love-in.

"He's such a great human being and he attacks his work and his life with such integrity," said Curtis. "His work ethic is unmatched … he has all the different elements of what we need in a coach."

"I've know Chris a long time and he is a winner … first and foremost that was the main important ingredient for us in a new head coach," added Manning.

Armas said he already feels in sync with Manning and Curtis. "They are in this together with the head coach," he said.

While both front office men said Armas will be involved in all decision-making, the new coach does not have the technical director title that Vanney held.

As for Armas, he said he welcomes the pressure of succeeding Vanney, TFC's most successful coach.

"That's exactly where, I think, real competitors want to be and that's one of the biggest reasons I came to the club," he said. "Yes, I want to win. The pressure's to win.

"This will wake me up early and it will put me to bed late. And then I'll sleep well. But I'm going to work, I'm going to work hard to deliver excellence, trophies. And I can guarantee that I will coach a team that is clear — they're clear with roles, we are together, we don't cut corners and we have a style of play that is on the front foot and we go after every game."

Asked about his preferred style of play, Armas said: "It starts with energy and passion."

He said he favours an up-tempo game, "making the game fast, playing vertical and, now of course with this roster, with real intelligence and decision-making."

On defence, he said he wants his team to take time and space away from the opposition. While the Red Bulls were known for their high press, he says more is needed in the toolbox.

He called it "attacking football" on and off the ball.

Armas, who won 66 caps for the U.S national team, was an elite defensive midfielder over 12 MLS seasons with the Los Angeles Galaxy and Chicago. He served as Red Bulls assistant before being elevated to the top coaching job in July 2018.

He led the Red Bulls to the Supporters' Shield and Eastern Conference final, losing to eventual champion Atlanta United. Armas was fired last September with the Red Bulls at 3-4-2.

Armas' appointment has already got a thumbs-up from Bradley.

"I was a young guy fortunate enough to spend a lot of time around that team," the 33-year-old Bradley told the club website. So for me to have the opportunity now to play for Chris, I'm really excited.

"I think his personality, his leadership, the way he can engage everybody around him, the standards that he'll have for the team, for every single guy, I think it sets up in a really really good way for us."

Curtis said the search for Vanney's replacement was "vast, exhaustive and methodical," involving everything from checking references to analyzing international clubs to see if their style of play matched Toronto so as to target their coaching search.

"Like everything it's both a science and an art and then it's gut," said Curtis.

A father of two boys, Armas' wife is a nurse.