Letters: These are the sins of the churches

The churches must be hit hard where their hypocrisies will hurt most: their wallets.
Jul 16, 2021 6:00 PM By: Letter to the editor 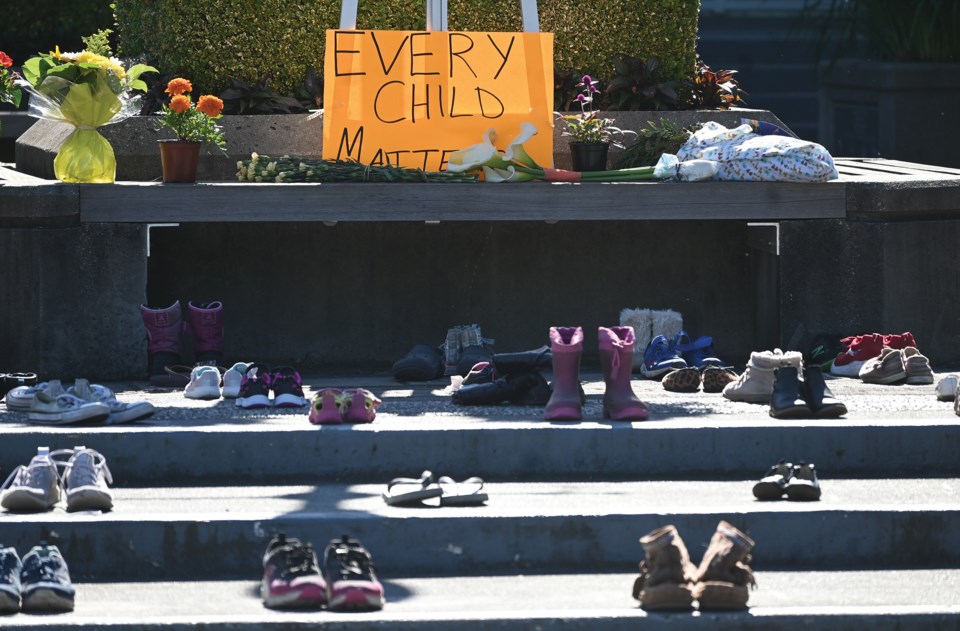 A memorial of little shoes to honour the 215 First Nations children whose remains were found buried at the former Kamloops Residential School was set up at Delta City Hall on May 31.Delta Optimist/File

Re: Reflections on past transgressions . . . The extent of damages lies . . . (Optimist, letters to the editor).

H. DeSouza is correct to point out that Canada’s government set up residential schools but is wrong to blame Canada for the sins of the churches.

I assume that the churches accepted or sought (or sought and accepted) the work from Canada with a mind to convert native children to their competing Christian faiths.

I doubt that Canada expected the churches to beat, brow-beat, rape, and, in some cases, murder their young charges—no, these are the sins of the churches whose clergies promoted themselves as pious and superior to thee, me and to each other. Catholics looked down on Protestants, and vice versa; and Christians despised others, such as Muslims and Hindus, who returned the scorn.

Apologies? They’re too easy. And “heartfelt” acknowledgements ring hollow. The churches must be hit hard where their hypocrisies will hurt most: their wallets.

There’s local precedence: two examples: in 1999, the B.C. Supreme Court ordered the Anglican Diocese of the Cariboo to pay 60 per cent of sexual abuse damages while Canada had to pay 40 per cent; and in 2000, the Roman Catholic Diocese of Victoria issued bonds at six per cent and sold off properties to cover $17 million in secret debts that their Bishop, Remi DeRoo, had run up on Arabian race horses and land speculation in Washington State; then, legal costs and court decisions added more debt to the $17 million. When their bishop gambled with trust monies and lost, Catholics dug deep. And when the court ordered, Cariboo Anglicans paid.

Tom Littlewood’s letter, the extent of damages lies beyond the unmarked graves” cites the “inter-generational trauma” that the churches’ hypocrisy has caused. Hurt is costly to treat. It’s time for the churches to put up or shut up. If they don’t put up, Canada can enable itself through civil forfeiture law to seize the churches’ loot and assets in the same way that it seizes drug pushers’ fortunes as proceeds of crime. Hypocrisy is not a crime, but paedophilia, cruelty and murder are.

Context? Yes, strapping was sanctioned punishment in all schools, so some of the physical mistreatment that happened in residential schools was due to the ignorance of the times—but not the sadism and paedophilia.

More context? We should remember that churches built the first hospitals in Canada. St. Paul’s. St. Joe’s. The Jewish General. The Grey Nuns and so on, in which anybody of any creed or race was treated without question. However, I know of a United Church of Canada hospital where labels on prescriptions for “Indians” were handwritten while those for “Whites” were typed, a childish distinction, but so obvious in its racist intent.

Should the Pope apologize on Canadian soil? No, considering Canada’s COVID-19 debts, Canada can’t afford to pay the bill for ‘His Holiness’s’ safety and security. Why should it? Besides, money to cover such a trip would be better spent on treating the churches’ victims.