The MK Delta Lands application will heading back to Metro Vancouver.
Sep 6, 2019 8:52 AM By: Sandor Gyarmati

The MK Delta Lands application will heading back to Metro Vancouver.

Earlier this summer the Metro board granted first and second readings to a land use designation change from agricultural to industrial and referred the development proposal to municipalities for comment. The other cities had until Sept. 6 to provide comment.

A letter by Metro chair Sav Dhaliwal to Delta mayor and council explained the regional district will review all those comments before considering final approval. A public hearing is not required.

Delta council granted conditional approval following a public hearing in the summer of 2016, but final approval was pending a number of conditions being met.

The plan includes the transfer of all of MK Delta’s other land holdings, which total 132.7 hectares (328 acres), to the City of Delta for conservation, including land east of Highway 91 where the company had originally sought to build housing.

The industrial project earlier inched a step closer to reality when the Agricultural Land Commission granted conditional approval, but the land commission ruled against placing a restrictive covenant to not allow farming activity on a parcel that is to be handed over to Delta.

Several members of the Delta Farmers’ Institute during the 2016 public hearing were opposed to Delta’s plan to remove all the land that would go to Delta from the Agricultural Land Reserve, describing the city’s agricultural assessment as weak. They wanted assurance at least one parcel would be available for farming, but Delta wanted to add all it to the bog ecological reserve. 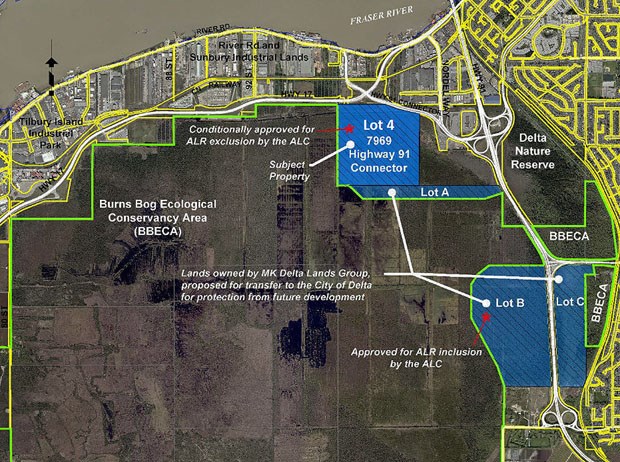 Meanwhile, a separate plan to build a large industrial complex, also adjacent to Burns Bog, is also slowly winding its way through the approval process.

According to the City of Delta, at the time of Delta council’s final adoption in August 2018, a no-build covenant was registered on the property in the 5200-block of 88th Street in order to secure external agency approvals for on- and off-site servicing requirements.

The property, which is not in the ALR but requires access through farm reserve land, borders the south side of the bog conservancy area.

The industrial park would be accessed from 88th Street and to facilitate two-way truck traffic, the street would be widened. To mitigate traffic impacts, several other improvements are planned, including a new interchange at Highway 99 and 78th Street.

In July of this year, the ALC conditionally approved Delta's application for components of the interchange and servicing for the site. City staff will work with the ALC to satisfy the conditions of that approval.

Staff and the applicant are also working with B.C. Hydro, B.C. Rail, the Ministry of Forests, Lands, Natural Resource Operations and Rural Development, as well as the Ministry of Transportation and Infrastructure to finalize approvals for on- and off-site servicing requirements. Once the servicing requirements have been finalized, the applicant has to enter into a development agreement with the city.