LONDON — Britain’s royal family is smarting from its depiction in Meghan and Harry’s explosive TV interview as aloof, uncaring and tinged with racism.
Mar 11, 2021 12:48 PM By: Canadian Press 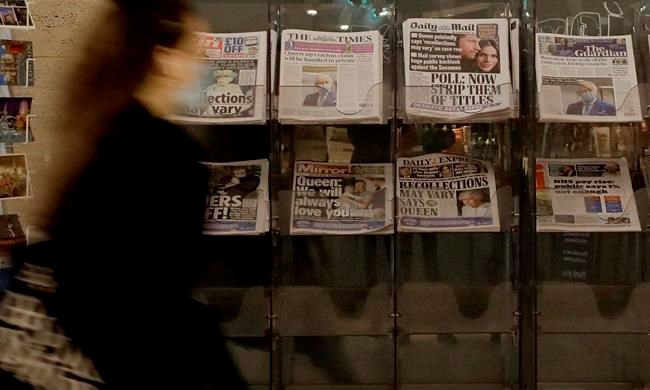 LONDON — Britain’s royal family is smarting from its depiction in Meghan and Harry’s explosive TV interview as aloof, uncaring and tinged with racism. But the couple identified an even bigger villain: the British media, which they accused of racist bullying and personal attacks.

Many in the media argue that although some tabloids occasionally go too far, journalists play a vital role holding Britain’s taxpayer-funded royal family to account. But some British journalists, especially those from minority backgrounds, hope the interview will trigger a long-overdue reckoning with media and lack of diversity.

Marcus Ryder, professor of media diversity at Birmingham City University, said it was too glib to speak of “watershed moments.”

“But I would suggest that this is a moment which will help shape the industry,” he said.

In the couple’s interview with Oprah Winfrey, Meghan accused British tabloids of “attacking and inciting so much racism” against her. Harry depicted a toxic relationship between monarchy and media, saying the royal family was “scared” of the tabloid press.

Talk show host Piers Morgan, a familiar TV face on both sides of the Atlantic, quit “Good Morning Britain” amid an outcry over his comments about Meghan, particularly her description of mental health struggles and suicidal thoughts.

Morgan told viewers on Monday that “I don’t believe a word she says.” His comments drew more than 41,000 complaints to Britain’s media regulator. Morgan walked off the “Good Morning Britain” set on Tuesday when another presenter challenged him, and quit the show later the same day.’

The furor has also claimed the job of Ian Murray, executive director of the Society of Editors. The new media umbrella group released a strongly worded of the press after Harry and Meghan’s interview, saying “the U.K. media is not bigoted and will not be swayed from its vital role holding the rich and powerful to account.”

That prompted a backlash. Top editors of The Guardian, the Financial Times and HuffPost UK took issue with the statement, while 160 reporters and editors signed a letter saying the Society of Editors was “in denial” about racism.

ITV News anchor Charlene White, the first Black woman to present the network's main evening news program, pulled out of hosting the society’s annual Press Awards, saying the organization asked her to get involved to improve its diversity but failed to live up to its words.

“Since the Black Lives Matter movement really took hold in the U.K. last year, every single institution in this country has had to finally look at its failings and its position in terms of how they treat ethnic minorities both inside and outside of its walls,” White told the society in a statement. “But for some unknown reason, you feel as though the U.K. press is exempt in that discussion.”

On Wednesday, Murray stepped down, acknowledging his statement “could have been much clearer in its condemnation of bigotry and has clearly caused upset.”

Britain’s media, while diverse in its political and social views, is not representative of the population in terms of race, gender or class. Non-white Britons and women are underrepresented, while graduates of private schools hold a disproportionate share of the jobs.

Journalists who are working to change the situation say it is not easy.

Marverine Duffy, a former news anchor who directs the journalism program at Birmingham City University, says “improving the numbers of ethnically and socially diverse qualified journalists into newsrooms is paramount,” but is not enough.

“Systems need to be put in place to shake up group-think, anti-Blackness and the unwillingness to see racism and xenophobia for what it actually is, instead of turning a blind eye,” she said.

As well as sparking a debate about diversity, Meghan and Harry’s interview highlighted the media's complex, uneasy relationship with the monarchy.

For decades, Britain’s royal dramas played out largely in private as a deferential media protected the secrets of the monarchy. In the 1930s, the romance between King Edward VIII and divorced American Wallis Simpson was headline news in the U.S., but barely mentioned in Britain until the king abdicated to marry the woman he loved.

That deference was evaporating by the time Prince Charles married 20-year-old Lady Diana Spencer in 1981. British media charted every twist of their increasingly unhappy marriage. Glamorous Diana became the world’s most famous woman, trailed by paparazzi up to the moment of her death in a Paris car crash in 1997 while being pursued by photographers.

Diana’s death prompted soul-searching for both palace and press. But it did not heal their troubled relationship.

Harry has spoken of his fear that history will repeat itself and his wife will suffer the same fate as his mother. When he and Meghan quit royal duties last year and moved to North America, they cited what they said were the unbearable intrusions and racist attitudes of the British media. The couple are suing several U.K. newspapers for invasion of privacy.

Ryder said the challenge for the media was differentiating legitimate stories about royalty that are in the public interest from intrusive gossip.

“Because if the only people that are making that call are white people from a certain background and are predominantly male, they will make different subjective calls than if we have more diversity.”

Others point out that despite their hostility to the British press, Harry and Meghan are deft media manipulators themselves.

Ed Owens, a historian who has studied the relationship between the media and royalty, said the couple is “utilizing the new channels of media — things like social media, the Oprah interview — to try and reach out and connect with new audiences.”

“This is nothing new,” he said. “The royals have always sought out new forms of media in order to connect with the public. Another thing that’s not new is the way that they used, if you like, a language of suffering and hardship in order to evoke an emotional response from media audiences around the world."

"And I think to a large part, they succeeded,” he said.