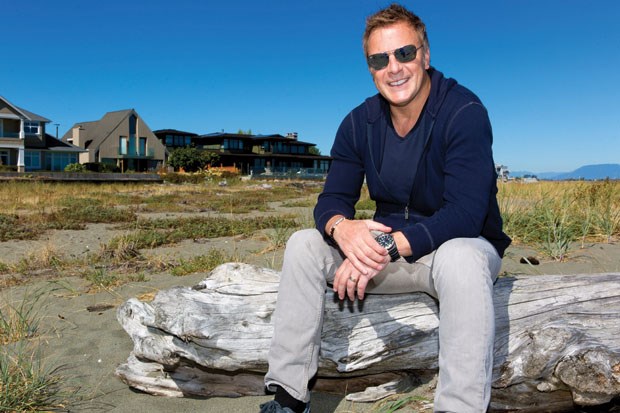 Actor Mike Dopud has compiled an extensive list of credits over the years. He’s recently been filming for TV shows Arrow and iZombie.Gord Goble

Tsawwassen's Mike Dopud says he's always been fascinated with movies and that he's always wanted to be an actor.

"But it was never something I thought I could do growing up in the suburbs of Montreal," he says.

He recalls watching films like Mad Max and Escape from New York with his brother.

"Mad Max was the movie for me that really made that shift where I was like, 'I would love to be in that world one day.'" Taking a look at Dopud's IMDB page shows he's not only made it into the TV and film acting world but has turned his stay there into a lasting one.

He's recently been filming locally with roles in TV series Arrow and iZombie while earlier this year he was filming in Auckland, New Zealand for a film titled Project Eden.

His extensive acting credits that stretch back into the 1990s include roles in major movies such as X-Men: Days of Future Past and Man of Steel as well as TV series such as Strange Empire, Cedar Cove, Arctic Air and Continuum.

The 48-year-old, who lives in Boundary Bay, says doing your job goes a long way.

"I was very fortunate when I came into this industry doing stunt work, I learned how to be prompt, make sure you're there, don't screw around and be really professional. That's carried over to my acting career," he says. "I bring the same thing to the table."

One of Dopud's memorable roles was playing Vic Hadfield in the 2006 two-part miniseries Canada Russia '72 that aired on CBC.

"It was such a thrill to be part of that," he says.

Hadfield was a member of Team Canada as the group of NHL pros faced off against a skilled Russian squad in the 1972 Summit Series.

Dopud, who briefly played in the Canadian Football League with the Saskatchewan Roughriders and also with the Columbus Chill in East Coast Hockey League, recalls that working on that miniseries was like being part of a family and having teammates.

"It was almost like being back playing sports again."

Dopud, who started off as a background performer, says having a pro sports history ended up providing a great transition into stunt work.

"Slowly but surely, I started getting more and more work."

Although he's still doing fight scenes, these days Dopud is focusing on his acting, saying with a chuckle that he's gotten older and is trying to "preserve the body as much as I can."

He'll be making an appearance on the CBC show Mr. D this season. He calls it a great experience as it marks the first time he's worked with his son Dane.