Twenty-three DNCBers enjoyed a rainless, almost comfortable, Tuesday morning birding the hotspots in Point Roberts USA. Our photogs got some great shots, but our Flickr site is “down” at the moment.
Feb 3, 2020 1:35 PM By: Tom Bearss 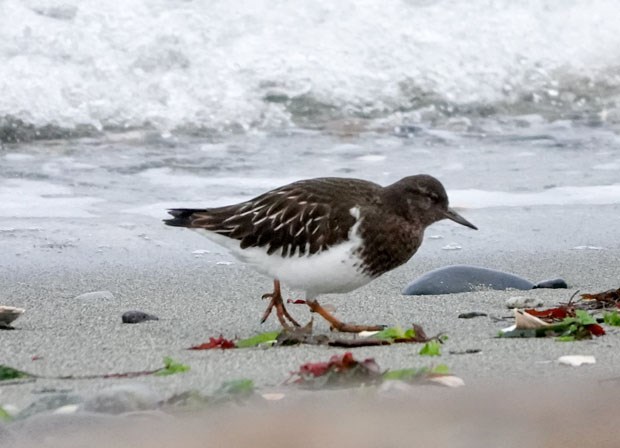 Twenty-three DNCBers enjoyed a rainless, almost comfortable, Tuesday morning birding the hotspots in Point Roberts USA.  Our photogs got some great shots, but our Flickr site is “down” at the moment. I’m providing links here to our DNCB Flickr “Pool”, and to some of our Nats photog’s individual sites: Glen, Terry, David, Noreen, Pat and Brian.  You’ll see brilliant photos on all these sites.

The 10 folk in Petra’s at 7:30 a.m. all left for the border in their own cars to buy the cheap gas. Border was smooth for the convoy; we stopped at Kiniski’s Reef Tavern first. It was very cool, cloudy and windy; water was high and wavy in the Salish Sea. Lots of neat birds south of the ferry terminal, but required patience and a scope to spot, for example Common Goldeneye, both Horned and Western Grebes (further out), Bufflehead, probably all three Cormorant species flying by (Double-crested, Pelagic & Brandt’s), Red-breasted Mergansers, Surf & White-winged Scoters, and Common Loons.

We drove to the Lighthouse Marine Park where the others were waiting. As the chatfest lingered on, the resident Black Turnstones were feeding up close on the limited bit of shoreline. We walked toward the Point, getting good looks at several pairs of spectacular Harlequin Ducks. Got brief looks too at the heads of a couple of California Sealions. We picked out a few Pacific Loons, and some saw Common Murres and Pigeon Guillemots. Noreen took the Group Photo at the Point, surprisingly with a bit of sun shining on us.

I/we couldn’t find a Rhinoceros Auklet or any other uncommon pelagic species. David listed 40 species seen on his eBird list (see below) for this morning.

The inland trail back to the parking lot was relatively quiet too. Sparrows (Song, Golden- & White-crowned) and House Finches were flitting in the bushes, but no Wrens seen today. Anna’s Hummingbirds were entertaining.

Next stop was the north-west side of the Marina. The resident Belted Kingfisher was there, and caught a little fish for us.  Between the moored boats were Lesser Scaup, Bufflehead, and both Common and Barrow’s Goldeneye doing their neck-breaking ritual. On the drive to the south side of the Marina, a perched Red-tailed Hawk was the only raptor we saw other than the Bald Eagles which are everywhere this Winter.  More Harlies, Scaup and Goldeneye here; the immature Goldeneyes arousing discussion as to whether they were Barrow’s or Common. Killdeer were in the field, but no Meadowlarks.

We bypassed Sea Bright Farm and drove directly to Lily Point Park. We went to both Lookouts in the park, and there were lots of “dots” in the Strait below. We could ID, with our scopes, many of the same species already seen, but nothing new (e.g. Murrelets, Auklets, Murres).

It was just after noon when we left Lily Point, stopped for cheap gas, and drove to the Rose & Crown Pub in Tsawwassen for lunch.  Most of the 10 of us had the lunch special of vegetable/potato soup and an egg/cheese/ham sandwich, and it was delicious. And my pint of Original 16 Lager, also on special, hit the spot too. It was another fantastic DNCB outing.

On Tuesday, Feb. 4, our outing is to Brunswick Point, leaving Petra’s at 7:30 a.m. and meeting others at the River Road entrance in Ladner at about 8 a.m.

And don’t forget our Nats monthly meeting on Tuesday evening, Feb. 4, at 7:30 p.m. at the Benediction Lutheran Church in Tsawwassen with photographer Martin Gregus presenting on Snowy Owls and other raptors. All welcome, free.

As always, your comments are welcome.  Cheers: Tom