Eighteen DNCBers enjoyed a super sunny Tuesday at Blaine Marine and Semiahmoo Parks in Washington State. The photogs were ecstatic with the conditions and got some beaut shots of many species up-close-and-personal.
Feb 24, 2020 11:05 AM By: Tom Bearss 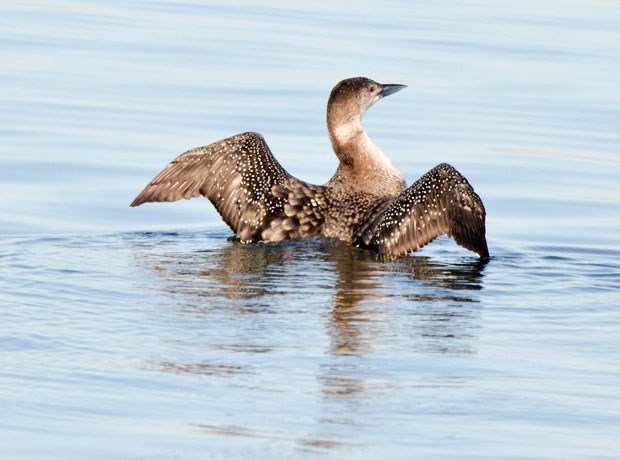 Eighteen DNCBers enjoyed a super sunny Tuesday at Blaine Marine and Semiahmoo Parks in Washington State. The photogs were ecstatic with the conditions and got some beaut shots of many species up-close-and-personal.  Check out their wizardry on our DNCB Flickr site.

All 18 of us met around 8:15 a.m. at the entrance to Blaine Marine Park. Roger took the Group photo at the lookout with the border Peace Arch and White Rock behind us.

There were hundreds of Northern Pintail in the Bay, and we also picked out a sleeping flock of Dunlin, both Common and Barrow’s Goldeneye, both Surf and White-winged Scoters (couldn’t find a Black), and a couple of Yellowlegs.

We moved on to the lookout at the end of Marine Drive, the entrance to Croydon Harbour.  The Long-tailed Ducks were close by here, with lots of Harbour Seals.  We argued over the ID of the many Loons in Semiahmoo Bay, Common, Pacific and perhaps Red-throated.  Tonnes of Cormorants around, both Pelagic and Double-crested.  Both Red-necked and Horned Grebes, and Red-breasted Mergansers were close too.  The Marina was fairly quiet, except for a brilliantly posing Cooper’s Hawk on a raft (no Eared Grebe found).

We “convoyed” back through Blaine around the Harbour to the Semiahmoo Park Museum parking lot. More Scoters, Scaup, Pintails, Goldeneye here (Bay side), but the large raft of Canvasbacks in Croydon Harbour, where we frequently see them, was most interesting. We couldn’t find a Redhead.  Then, closer to the marina at the end of the Spit, we saw more shorebirds, Sanderling, Black Turnstones, Black Oystercatchers and a Killdeer. The common little birds were around, but we didn’t see anything unusual (e.g. Redpolls, Crossbills, Grosbeaks). Hopefully Debbi will post our eBird list for the morning.

We wandered over to the Semiahmoo Resort lookout and saw the same species, and the vista of the surroundings, including the snow-covered mountains, was glorious.  I had lo leave at Noon for a Doctor’s appointment in Ladner, so didn’t stay for lunch.  The border was smooth sailing both ways and it was another gorgeous DNCB outing.

On Tuesday, Feb. 25, we’ll leave Petra’s at 7:30 a.m. and, via the Tsawwassen Ferry jetty, meeting others around 9 a.m. at Reifel Bird Sanctuary.

For more info on this and other outings, events, reports and photos, check out our website. As always, your comments are welcome. Cheers: Tom