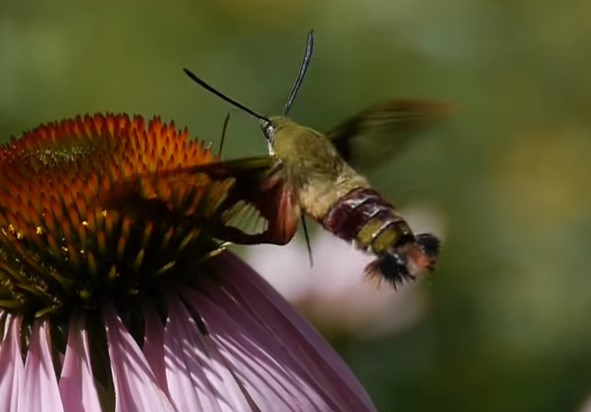 The hummingbird moth flies and moves just like a real hummingbird. Similarly, they can remain suspended in the air in front of a flower while they open up their long tongues and insert them in flowers to drink the nectar (some of the pollen that gets stuck to their upper body transfers to the flower). And again, they even emit an audible hum like hummingbirds. These little moths do actually look like a hummingbird except it has six legs, antennae and a proboscis (tubular mouthparts used for feeding and sucking). They tend to live in open woodlands, gardens and meadows, and are very good pollinators. There are two types of hummingbird moths that live in the Canada: the Snowberry Clearwing and the Hummingbird Clearwing. They are called clearwings because they have clear areas on their wings that look like panes of stained glass windows. When they hatch, the entire wing has scales on it but after the first flight attempt, the scales fall off revealing the clear patches. The theory is that the clear wings mimic the appearance of bees, wasps and hornets, so that predators will not bother them. These guys are day-flying moths, where most moths come out at night.