Key government officials also say they learned about money laundering in casinos from media reports, and not gambling officials and regulators
Apr 22, 2021 3:39 PM By: Graeme Wood 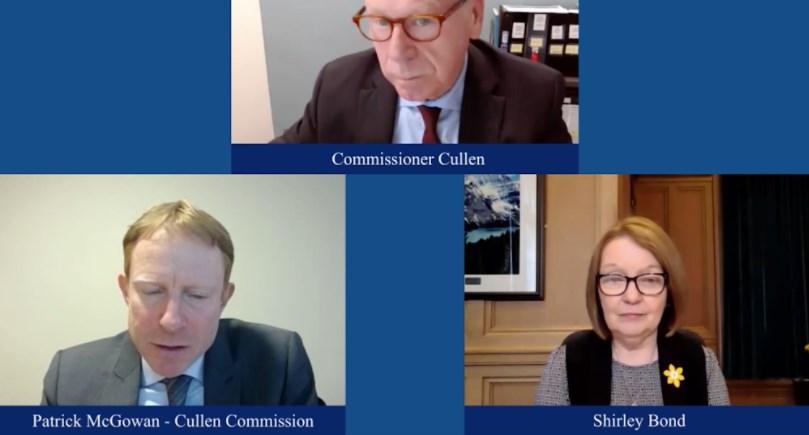 BC Liberal interim leader Shirley Bond told the Commission of Inquiry into Money Laundering in B.C. her government was responsive to concerns from casino investigators, despite delaying – for close to five years – a key recommendation made in 2011 to establish a police-involved task force.

Bond was the Minister of Public Safety and Solicitor General between March 2011 and February 2012. She received a report in August 2011 from then director of civil forfeiture Robert Kroeker recommending a task force to address casino investigators’ reports of suspected organized criminals laundering bags of six-figures worth of $20 bills at cash cages.

The failure of the provincial government to augment these money-laundering concerns to the RCMP, combined with the federal Conservative government’s decision to scale back its financial crime sector in 2012, meant police were not directly involved with Gaming Policy and Enforcement Branch (GPEB) casino investigators until near the end of 2014 – when an RCMP investigation was finally launched into a transnational criminal network suspected of laundering hundreds of millions of dollars of illicit drug proceeds via underground banks connected to China.

Bond explained her government was going to wait to see how the other recommendations, such as digital gambling accounts, would play out before creating the task force.

“I agreed this recommendation was important …it was part of the ongoing work,” Bond told commission counsel Patrick McGowan.

But McGowan showed Bond a ministry briefing note stating the task force “can be complex and costly.”

It took until April 2016 to announce the BC RCMP’s Joint Illegal Gaming Investigation Team (JIGIT).

JIGIT was analogous to the Integrated Gaming Enforcement Team, which was cancelled in 2009 by Bond’s predecessor Rich Coleman, who would once again take control of casinos manager B.C. Lottery Corp. (BCLC) from Bond in 2012. Bond deferred questions as to the subsequent progress of the task force recommendation to Coleman, who will testify April 28.

Bond, an MLA for over 20 years, said in her 11 months on the gambling file, she was never briefed on money laundering by BCLC CEO Michael Grayson. Grayson has told the commission the Christy Clark government set a new “tone” to collect revenue, resulting in a pointed email to his executive staff in 2011 that bonuses would not be paid if revenue targets were not met.

Bond confirmed she never directed Grayson in such a manner.

On Tuesday Clark, B.C.’s premier from 2011 to 2017, deferred much of her knowledge and responsibilities on BCLC anti-money laundering policies to her ministers in charge of the Crown corporation, such as Bond.

Clark proactively told of how her government prioritized cost cutting measures, not necessarily revenue. As like any commission witness, Clark would not have been able to watch prior commission testimony but could read media reports on it, including testimony from government officials, such as lower level casino investigators who claimed government revenue considerations played a role in the apparent poor response to the bags of cash.

McGowan also asked Bond if money laundering had ever been raised in cabinet meetings.

“I have no specific recollection of that,” said Bond.

Despite McGowan’s question commission counsel confirmed with Glacier Media it has "obtained relevant cabinet documents from both the current and former administration."

It was Coleman who ordered the ‘Kroeker Report’ following media reports of rising suspicious transactions, particularly at Richmond’s River Rock Casino and Resort.

The commission has heard of how Coleman was made aware of the growing problem.

But prior to Bond’s testimony, Lori Wanamaker, current Deputy Minister to the Premier, and former Deputy Minister of Public Safety and Solicitor General during Coleman’s first stint controlling BCLC and GPEB, somewhat disputed controversial claims by GPEB investigations manager Larry Vander Graaf of a December 2010 meeting between them and Coleman.

Vander Graaf had written in an affidavit that he warned Coleman of the suspected drug cash. He claimed Wanamaker said, “Rich, we need to do something about this.”

This was after Vander Graaf told Coleman about the $20 bills and Coleman apparently replied, “I have lots of friends that carry $10,000 in their pocket.”

But Wanamaker said she couldn’t recall the conversation and added she would never call a minister by their given name.

Wanamaker also said she received no briefings on money laundering from Grayson before the Kroeker Report was ordered.

Wanamaker couldn’t recall many things around this time raised by McGowan.

After the Kroeker Report, BCLC cited the need for an AML action plan for 2012-13 – the first time BCLC specifically mentioned money laundering in its annual letter of expectations.

Both Wanamaker and Bond said they initially learned about money laundering concerns from 2010 media reports.

The commission is trying to drill down on chains of command and communication to determine how such a problem persisted for so long. Deputy ministers are key go-betweens for elected officials and lower level deputies in charge of investigations.

Updated: Christy Clark says casino oversight was seldom on her radar as premier
Apr 20, 2021 11:54 AM