Repairs won't be completed until the fall due to challenging terrain, says BC Parks.
Jun 24, 2021 12:05 PM By: Darron Kloster / Times Colonist 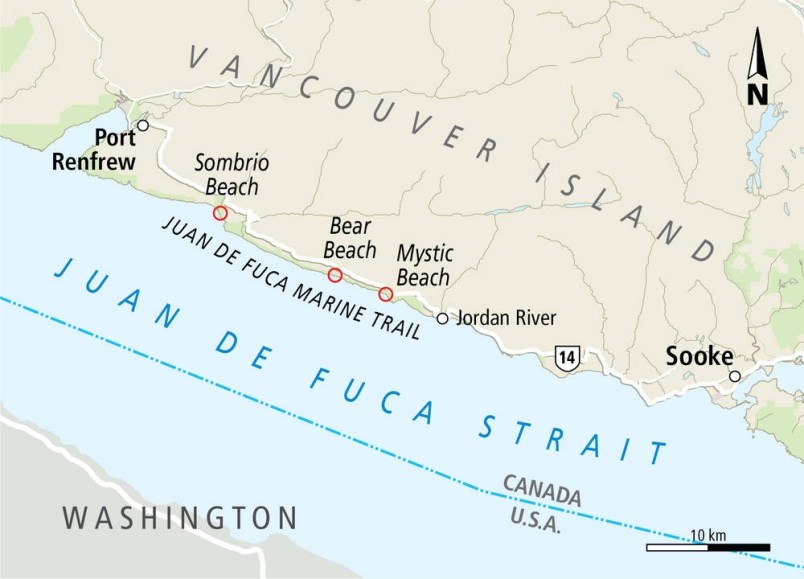 A key section of the Juan de Fuca Marine Trail has been cut off after a landslide destroyed a section of stairs, and repairs won’t be completed until the fall due to the challenging terrain, says BC Parks.

The closing of access between Mystic Beach and Bear Beach — an 8.9-kilometre ­section — comes as the trail enters the peak summer season. Hiker traffic has been heavy over the past year due to the rise in outdoor activities during the pandemic.

BC Parks said in a ­statement the stairs just east of Bear Beach were repaired late last month after a washout was discovered in March.

The trail reopened on June 7, but another landslide on June 20 caused heavy damage and made the trail impassable. There are no bypass routes due to steep cliffs.

In an email late Wednesday, BC Parks said the steep cliff approach to Bear Beach will require a series of “engineered and fabricated” aluminum ­ladders and landings hoisted to the site by helicopter and drilled into the bedrock. “Due to the project’s complexity, this permanent repair cannot be completed until fall,” the email said.

BC Parks has sent notices to permit holders and pre-registered hikers, and signs are posted at all major trailheads.

Mike Hicks, who represents the Juan de Fuca electoral area for the Capital Regional District, said the timing of the closure “is a real blow,” as hikers from the CRD and across the province plan summer vacations around the popular trail. “It’s like closing a bridge at rush hour … the timing couldn’t be worse, especially with the pandemic,” Hicks said.

A 21-kilometre section of the trail was closed from February to June 2019 when several sections were improved, with new stairs, boardwalks and bridges.

Hicks said the West Coast Trail and Juan de Fuca Marine Trail are “huge economic drivers” for businesses in Sooke and Port Renfrew, as hikers stop for gas, food and other supplies, and book resorts and fishing charters.

However, he said, people who live along the Juan de Fuca Marine Trail also have to deal with increased traffic and noise, as well as litter.

“We’ve been overwhelmed since the pandemic, but they’re not complaining,” said Hicks. “The people I represent in Shirley and Jordan River never make a penny off tourists, but they put up with a lot. Sometimes, you get 200 motorcycles in a weekend, people are camping on the side of the road. We’ve been overloaded with people in areas like Jordan River.”

On the positive side, said Hicks, the area is expected to have cellphone reception by the end of the year after Rogers and the province announced the construction of new towers, and the CREST emergency frequency is operating for first responders.