Residents raise concerns about proposed development's effect on Semiahmoo Trail
May 7, 2021 10:08 AM By: Graeme Wood 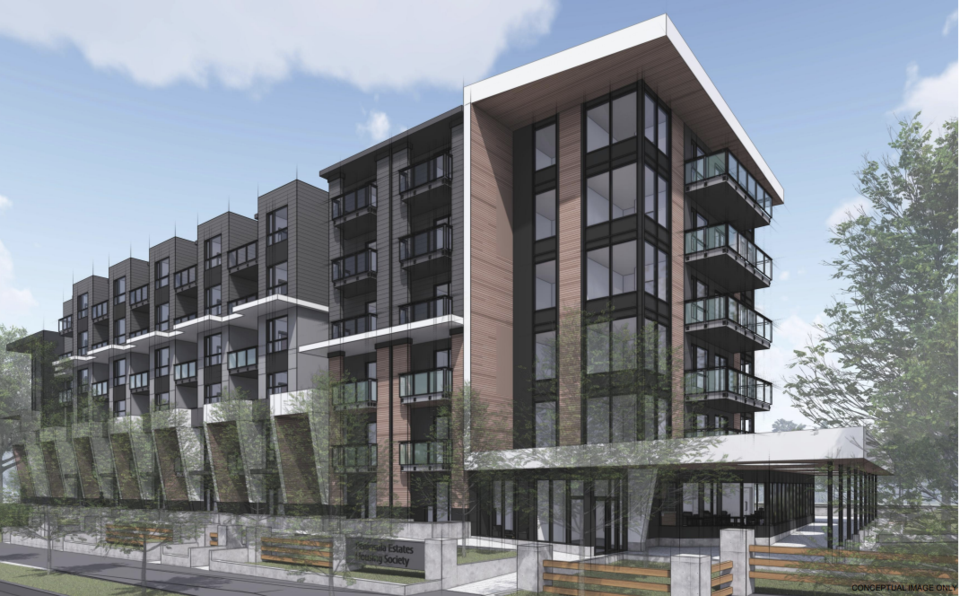 Peninsula Estates Housing Society's proposed 91-unit rental complex in South Surrey. City of Surrey
Surrey city council members say a plan to build a 91-unit, non-market rental housing project in South Surrey needs refinement after some residents claimed it would infringe on the popular Semiahmoo Trail and would be too dense for the neighbourhood.

City planners recorded 55 people against the project by Peninsula Estates Housing Society. Common concerns included the height of the six-storey apartment unit, tree loss and density, as it will replace 17 two- and three-bedroom townhomes at 20 Avenue and 151A Street. But the biggest concern was how the apartment complex will push the Semiahmoo Trail to 151A Street.

“With all that and altering a heritage trail I think it may just be too much to ask for the residents,” said councillor Laurie Guerra at a council meeting April 26.

Mayor Doug McCallum said the trail has historical significance for the neighbourhood.

Coun. Brenda Locke said she was “torn” on the project because it pitted much-needed housing units against the special trail.

The project will bulldoze 17 out of 52 townhouses on the two-hectare site that are offered at 30% of a family’s gross income.

Of those, a minimum of 75% will be “affordable rental” and “up to” 25% will be “supportive housing” for people with disabilities, although there’s no indication of a minimum for the latter.

“If there are no eligible applicants that meet the eligibility criteria, the supportive rental unit may be rented as an affordable rental unit,” states the proposal.

In a shift, the society asserts it will base its affordable rents on a special appraisal of rents in the area, and not the standard Canadian Mortgage and Housing Corp. survey.

No one at council discussed this aspect of the plan.

The 91 proposed replacement rental units will be secured with a housing agreement for a term of 30 years.

The project saves money on parking costs, providing just 83 spaces as opposed to the required 137 for a complex that size (a nearby bus line is said to justifiy this).

No traffic assessment was done.

Integra Architecture Inc. is to develop the project.

The next council meeting is Monday, May 10.