Delta Nature Reserve walkers and cyclists may notice a strange new contraption in Lower Cougar Creek, alongside the trail between the second and third boardwalk entrances.
Aug 18, 2020 7:00 AM By: Delta Optimist 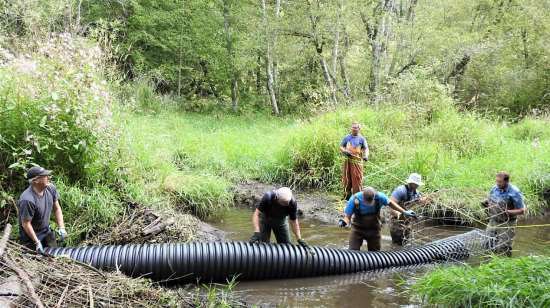 Delta Nature Reserve walkers and cyclists may notice a strange new contraption in Lower Cougar Creek, alongside the trail between the second and third boardwalk entrances.

Hopefully the beavers won’t notice the contraption, but will happily continue building their dam, unaware that the leveller limits their pond to a safe height that doesn’t flood the trail.

The pond leveller consists of a long flexible pipe through the beaver dam, with a cage at the upstream end to prevent beavers from blocking the pipe intake. The pipe invert (level of the bottom of the pipe) as it passes through the beaver dam sets a limit on how high the water level in the beaver’s pond can become, before it overflows into the pipe and exits downstream of the dam.

Though beavers are a nuisance, with their tree-cutting and dam-building, they are also a keystone species for healthy wetlands and salmon streams. A pond leveller is not maintenance-free, but it’s hoped this one will reduce the amount of effort the City of Delta has to spend on dismantling beaver dams to prevent flooding.

This is not to say that trail flooding has been eliminated. The low level of the trail itself, combined with large volumes of storm water runoff piped directly into the creek during rainy weather, guarantee that flooding will still occur.

The good news is that, over the coming years, Metro Vancouver will be upgrading the trail to regional greenway standards. As well, the City of Delta continues its efforts to reduce storm water runoff at its source by diverting it into landscaping (rain gardens) instead of piping it into the creek.

Not only is the natural floodplain a safety-valve for protecting built areas from floodwaters, it's also a vibrant and healthy wetland habitat that nurtures fish, amphibians, birds and – yes -- those industrious beavers.