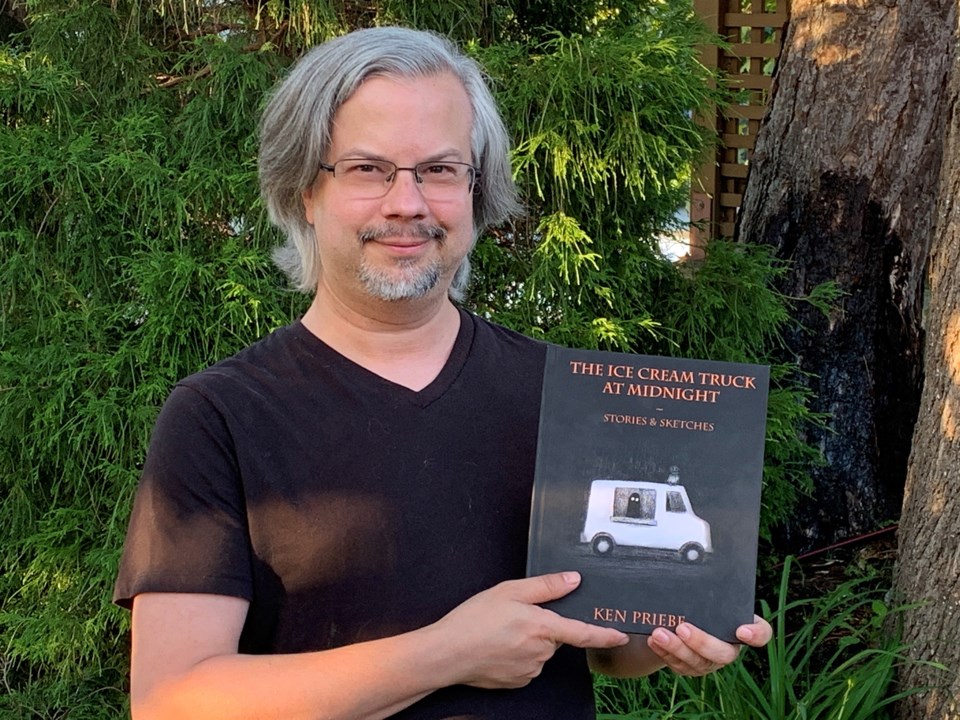 Whether it’s for your children, or for your own inner child, Ken Priebe’s new book The Ice Cream Truck at Midnight will have you reading under your blankets with a flashlight in hand.

With his third independently published book, the Ladner author, illustrator and animator hopes that everyone, regardless of age, will enjoy his illusive stories and the charcoal art within.

Inspired by the “whimsically spooky” works of authors Shaun Tan, Chris Van Allsburg, and John Southworth, Priebe explains how his book isn’t scary in the adult horror-movie kind of way, but is geared to pique the interest of young people.

“I write it with that in mind, that they’re not just for kids, but they’re for families to read together, and for teenagers to enjoy and grownups to enjoy,” he says.

Plus, kids love spooky stuff too, he adds.

“A lot of the stories in my book are designed to, kind of, have loose threads … it’s meant to leave the reader with filling in a lot of the gaps with their own imagination. Not everything is explained,” he says.

Priebe likens his book to “concept albums from rock and roll bands,” where the separate stories are all tied together by a unifying theme, but are uniquely different from one another.

He also says that the stories have a Twilight Zone feel to them.

The animator of 25 years is also excited to announce that he will be teaching animation workshops again at the Imagine That Arts Camp in Ladner this summer, which will run from July 19 to 23 and Aug. 9 to 13.

Priebe is also working on a book that will come out in spring of next year, called GOBLABET, which will be a goblin-themed alphabet book.

The Ice Cream Truck at Midnight can be purchased or ordered at just about anywhere that sells books, including Black Bond Books in Ladner and Albany Books in Tsawwassen.

For more on Priebe and his work, check out his website at www.kenpriebe.com.