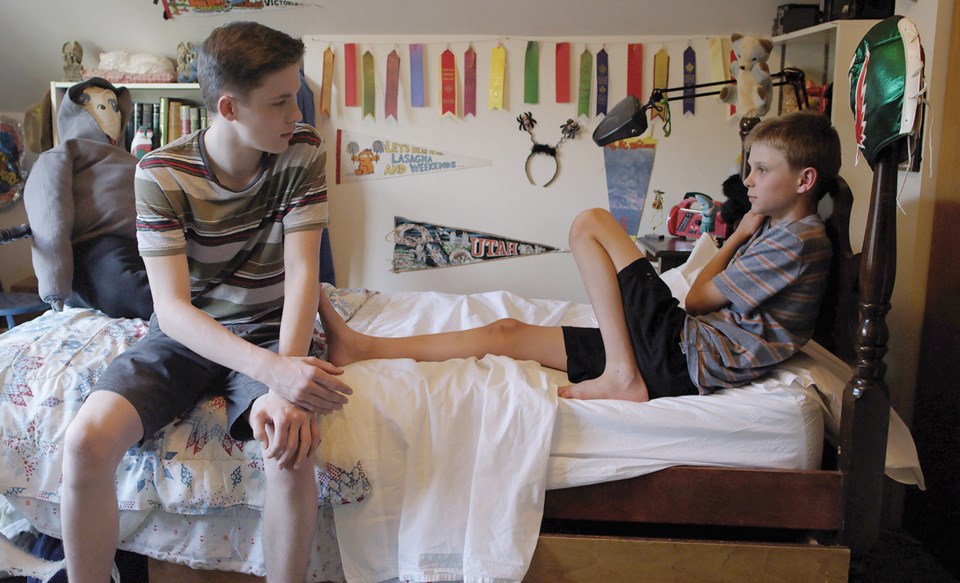 Ladner brothers Rhys (left) and Will Saleken star in the Dummy Factor, a feature film written, directed and produced by their uncle O. Corbin Saleken. It has already received awards and nominations from two film festivals.submitted

Thanks to the multi-talents of their creative uncle, family movies have a whole different meaning to Will and Rhys Saleken.

The Canadian independent self-funded film has already picked up awards with Corbin earning best director honours at the Deep in the Heart Film Festival in Waco, Texas. It’s nominated for best feature narrative at the Central Alberta Film Festival where Will is also up for best actor for his leading role as Noel.

The story is about a boy who investigates the disappearances of some children in his neighbourhood. It's largely based upon Corbin’s experiences growing up in Vancouver in the 1980s. He wrote the script about 20 years earlier. The window of opportunity was finally in front of him to proceed with Will and Rhys at the right age to play brothers in the movie. They were 17 and 12 at the time of production.

“I knew if I waited one more year Rhys would be in university and he would be having to work,” said Corbin. “You need these bits of incentives where you just make a commitment and once you have done it you really don’t have a choice.”

Corbin not only had actors that would work for free, he had access to about $100,000 worth of filming equipment thanks to his job as Film and Video Resource Specialist at Simon Fraser University. He was a one-man crew even though he had a role in the movie too. His duties included writing, directing, producing, cinematography, sound recording, production design, picture and sound editing, colouring, music, and mixing.

The entire production cost $1,200 compared to about $50,000 for his first film — the award-winning Patterson’s Wager — that was screened in festivals across North America.

Still, he would never been able to pull it off without the talents of his nephews. They have had some parts in some of Corbin’s other work but never scripted roles.

“The big thing with this was would they do it and can they actually act because it is scripted. They would have to learn their lines, act with scenes and other people. Understand to go A to B and arc within a scene and an arc in the entire film,” said Corbin. “I was so impressed with their acting. It was incredible. I can’t believe at how well they were able to just learn their lines and understand the scenes.

“Will had never looked at this stuff before but he would just get it and he was there. Kind of amazing how they were able to do it and be completely natural. Bad acting could be actors being asked to say dialogue they wouldn’t naturally say. That was an important thing. You don’t want it to sound like adults writing for kids. You want it to sound like kids would sound. Also be aware what is happening in the scene. I think it helped just me with the camera and they are obviously very comfortable with me.”

Rhys is now focused on his studies, majoring in English at Trinity Western University. Will is in Grade 10 at Delta Secondary. He has at least hired an agent and is looking for other acting opportunities. Whatever happens, they both have a lifetime of memories, making a movie with their uncle.

“It’s really cool. I don’t really view acting as a serious profession. It’s more for fun,” said Rhys. “My uncle creates that atmosphere where it’s just hanging out and doing a fun project, as opposed to making a serious movie, which is really cool. I also think when I am 30 or 40 and have my own family, it will almost be like a home movie to me.”

Corbin’s family flavour doesn’t stop at just his nephews. His mother, brother, and sister-in-law also make brief appearances. Most of the props are his too that adds to the 80s vibe of the movie.

“This movie is so personal. I have all this stuff and my justification for it is I make movies where I can throw all these props into it that I have been keeping,” he added.

“Anyone grew up in the 80s is going to recognize it. I had a paper route like the character in the movie. I remember reading this story about this kid who went missing in a super market. I used to have these nightmares of someone coming into my window at night. That’s what is in the movie.”

The New West Film Festival runs from Oct. 16 to 18. Access packages can be purchased by visiting www.newwestfilmfest.ca.

Ladner Village to make an appearance in upcoming Netflix series ‘The Midnight Club’
Jul 20, 2021 11:32 AM