K’ómoks First Nation member Sean Frank is related to some of the greatest carvers on the Northwest Coast
Feb 11, 2021 7:00 AM By: Mark Booth 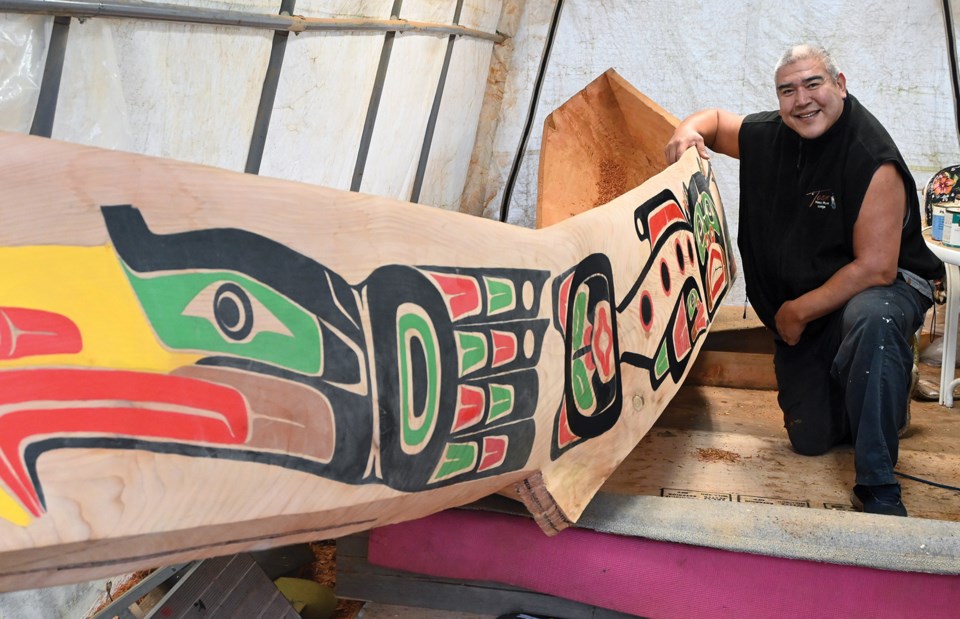 You never know what might be happening in the back of a lot in Ladner Village including First Nations artist Sean Frank finishing up this spectacular 18-foot red cedar dugout canoe that he was commissioned to do by the Comox Valley Regional District.Mark Booth/Delta Optimist

When Sean Frank isn’t working as a heavy machinery operator, he is continuing his family’s rich history as a First Nations artist.

The Ladner resident is busy these days finishing a spectacular 18-foot red cedar dugout canoe that was commissioned by the Comox Valley Regional District to be showcased at its soon-to-be-completed $126 million water treatment project.

Frank is a member of K’ómoks First Nation, reflecting his life on Vancouver Island before moving here 14 years ago.

“I come from a fishing family and I my entire upbringing was spent fishing. That left a lot of down time too so I started to do some carving. I saw there was a market for good art work and I’ve had some really good teachers, some of the greatest carvers on the Northwest Coast,” he recalled.

His grandfather is the renowned Doug Cranmer whose work is showcased at the UBC Museum of Anthropology and he also collaborated on a number of projects with the legendary Bill Reid. On the other side of Frank’s family are the Hunts who feature several internationally-respected First Nation artists.

It was almost a year ago that Frank acquired the log through the help of Tsawwassen First Nation artist Karl Morgan. He then got some assistance from friend and fellow artist Charles Joseph with the design and roughing out the canoe’s shape.

“I’ve taken part in a lot of canoe projects and a lot of big totem pole projects, but this is the first one I’ve taken on from start to finish that was mine as a big project,” said Frank. “It’s almost been a year with a few hours here and there where I could have done this in a month if I was a full-time artist.”

The canoe is roughly 3.5-to-4 inches thick, compared to the typical 1.5-to-2-inches since it’s being created for display.

That won’t prevent Frank from still testing it out in the water. The plan is to paddle around Ladner Harbour then have a ceremony at the lake located near the water treatment plant in Comox.

Its permanent home will be on the second floor as part of an interpretative centre which is why it has to be completed before the building.

“There is going to be a set of stairs but it’s not going to be straight. The idea is to get into the building before they put the roof on,” said Frank. “The top second floor is all glass. The canoe will be up against the glass and there will be a great view of it. The idea is to come inside and get up and close to it.”

The canoe isn’t Frank’s only work for the Comox Valley Regional District.

He earlier completed a 10-foot totem pole for the neighbouring office building, along with a 6x3 wood panel with a huge story carved into it that includes 30 animals and figures. He will be working on 9x4 doors that will also be part of the interpretative centre.

“There are not many artists from Comox and the idea is to showcase local art, local history and First Nation,” added Frank.