It started with a walk in a full suit of 15 th century plate armor. Then Darth Vader made an appearance and now this Friday rumour has it Chewbacca will be making an appearance.
Apr 30, 2020 7:36 PM By: Ian Jacques 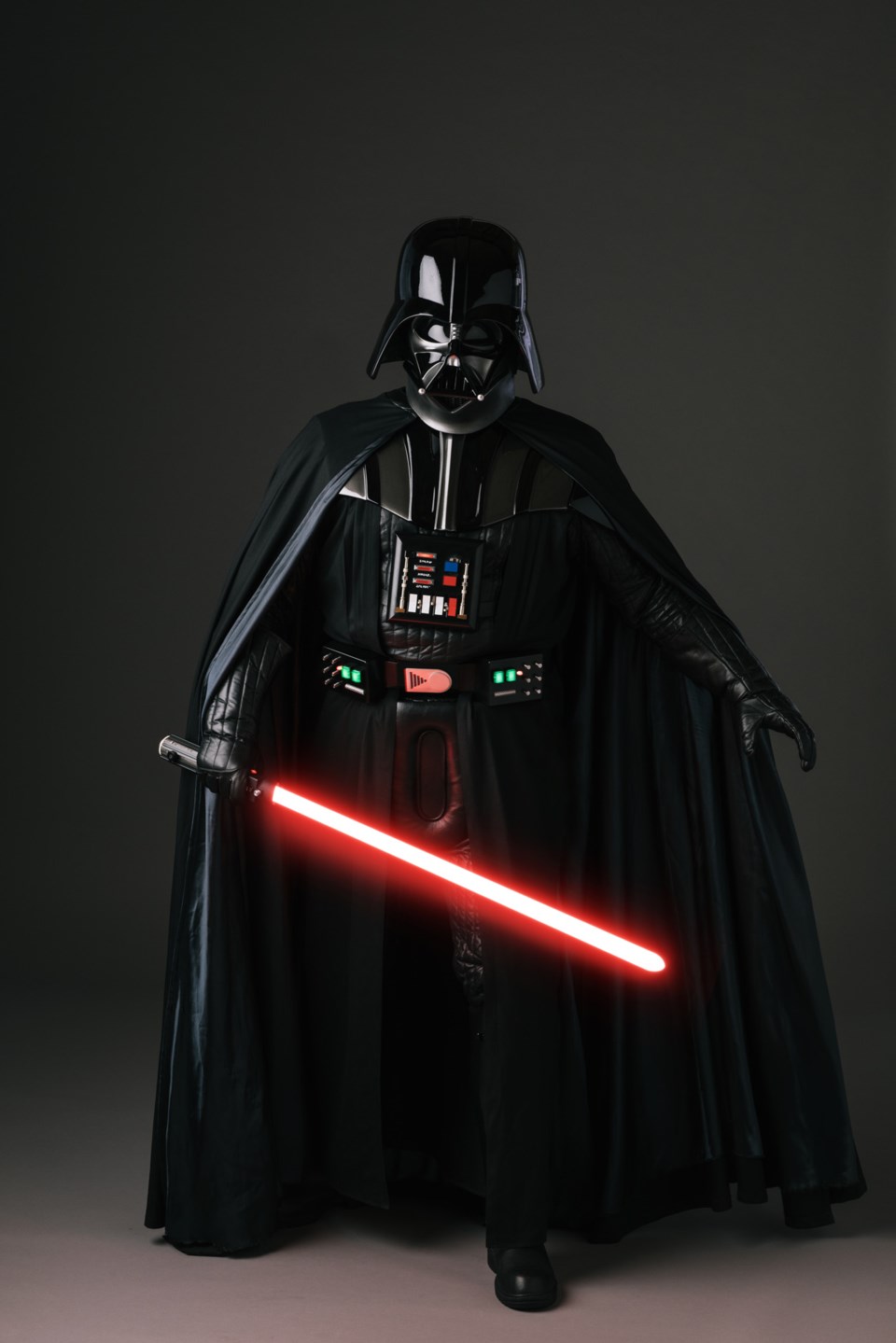 That Star Wars Guy, a professional film and television actor living in Tsawwassen, has created quite a buzz on social media with his Friday costume walks down 56th St.Submitted

It started with a walk in a full suit of 15th century plate armor. Then Darth Vader made an appearance and now this Friday rumour has it Chewbacca will be making an appearance.

The costume guy or as he likes to be known when he responded to an interview request from the Optimist ‘That Star Wars Guy’, has created quite a buzz on social media the past few weeks with numerous posts and photos of his costume walks down 56th St. in Tsawwassen.

“I am a professional film and television actor and I was also a Disney cast member many years ago (before they built California Adventure), as well as acting in Disney films,” he told the Optimist. “In fact, the reason I moved to Tsawwassen years ago was the result of shooting a Disney film here. I fell in love with Centennial Beach, and thought this place is fantastic for raising a family. It's been 15 years and I love this town.”

He said he often uses his costuming and acting skills to help raise money for various children's charities. He is also a huge Star Wars fan and has spent years building screen accurate costuming.

“I decided a couple weeks ago to see if I could tolerate doing a 10k walk in my full suit of 15th century plate armor, and I was quite happy that I was able to do so,” he said. “It's not as easy as it sounds, adding 130 pounds of extra weight and keeping the helmet closed. The response from people passing by was incredible. Many people waved, cheered, honked and thanked me as they drove by, and took pictures from a socially safe distance. With so much anxiety in the world right now, I thought it was fun to see people happy and laughing at such an oddity in Tsawwassen of all places.

“So, last Friday I thought it would be fun to take Darth Vader out for a 10k walk. This time I had people waiting for me to pass by - one family even dressed up as Vader knowing that he would be coming by. People have been commenting on it on the Tsawwassen Loop (new) and the regular Tsawwassen Loop on Facebook. The owner of Marios brought Darth in to accost his kitchen staff and give them a laugh.”

This Friday afternoon it looks like Chewbacca will be giving it a go (weather permitting), he said.

Usually the walk starts at about 4:30 p.m. near Fred Gingell and moves down English Bluff to 1st, then to 56th to 12th and back up the Bluff. Chewie is 7'2" so I think he will be terminating his walk in the Save on Foods Plaza,” he said. “Chewie is a pretty impressive character to see in public. These costumes are higher quality than those you would even find in the Disney Parks. They take a long time to make, and easily cost thousands to put together (if you do it right, that is).

“As a former Disney cast member and film actor, its' not important to know who I am, but more important to help create some magic for those who are able to catch a glimpse of these characters. After this week, who knows what will come next.”