Update: The show has been cancelled. *** The Sunday@3 Concert Series welcomes the Vancouver Thunderbird Chorus to the Ladner United Church this Sunday.
Mar 11, 2020 11:35 AM By: Delta Optimist 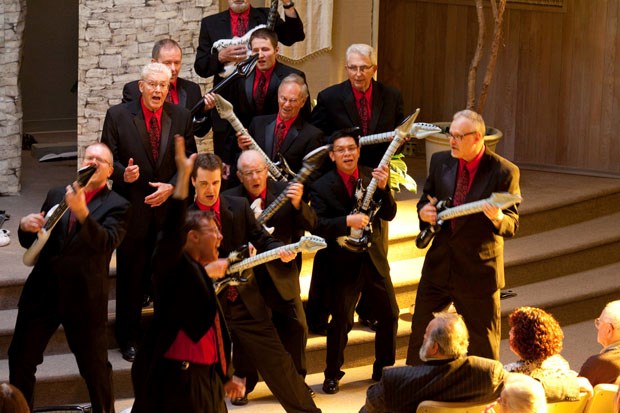 Update: The show has been cancelled.

The Sunday@3 Concert Series welcomes the Vancouver Thunderbird Chorus to the Ladner United Church this Sunday.

Since 1950, the Vancouver Thunderbirds have provided a rewarding singing experience for people of all ages and walks of life. They sing unaccompanied close-harmony music arranged mainly in the barbershop style and their varied repertoire encompasses swing, gospel and modern.

While musicality and technique are important, the chorus strives to be “actors who sing” in an effort to make an emotional connection with the audience.

Over the years, they have entertained thousands through many public performances.

The Thunderbirds stage one major show annually and a number of other performances throughout the year. Every Christmas, they perform at shopping malls, local schools and seniors centres. In addition, they participate in a spring and fall contest organized by the Barbershop Harmony Society.

Chorus director Dave Vincent brings an enormous amount of knowledge, excitement and enthusiasm to the Thunderbirds. Vincent is aided by an able music team whose energy is devoted to the development of each member's musical potential.

Also on hand for the show will be Full Measure Quartet, a group associated with the Chorus who are just returning from a tour in Europe.

They will perform a set of songs complementing the concert.