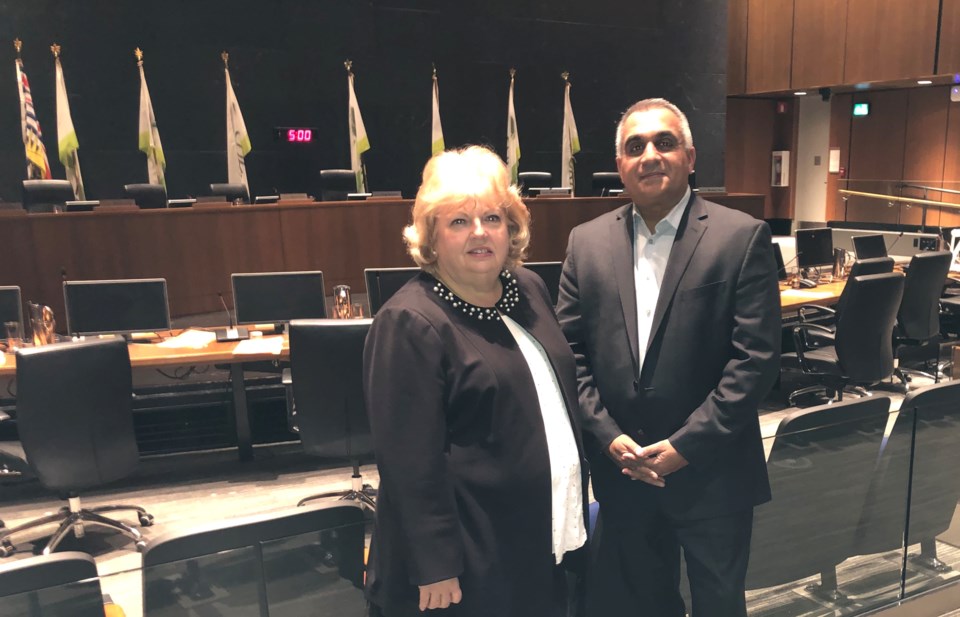 Two Surrey councillors have formed a new political slate but have no immediate plans to consider unseating Mayor Doug McCallum, their friend-turned-foe who continues to lead a five-member majority in council chambers.

Locke said their primary concern at this point is to conduct community outreach and potentially bring on board any interested fellow council members or future candidates for the 2022 election. But with two and a half years until campaigning ramps up again, neither Locke nor Hundial have considered a run at the mayor’s seat, said Locke.

“It’s too early. We just want to go out to the city,” she told Glacier Media.

The pair split from McCallum, citing concerns over a lack of transparency on McCallum’s part for a planned police force transition – from the federal RCMP to a municipal force, envisioned as the Surrey Police Department.

“It will be a coalition of people as Surrey becomes the largest city in B.C. and we build a modern city; and [so] that we have an open and transparent government for the city of Surrey that’s responsive to the citizens.”

Both councillors have taken criticism from McCallum supporters for going back on their November 2018 decision to vote (along with every other council member) for a new municipal force. They have justified their departure citing yet to be proven hidden costs of the transition and a lack of public engagement during the transition process (McCallum cancelled council's public safety committee last year, for instance).

Few commitments to recreational facilities and infrastructure upgrades in the growing city have been another bone of contention.

Things began to turn sour during the first budget in December 2018 that resulted in several cancelled projects, with McCallum citing the need to keep taxes low and reduce internal debt. Both Locke and Hundial voted against the budget as well as the one passed (5-4 vote) last month, which outlined few significant capital projects aside from the estimated $45 million police force transition costs over the next two years.

“We’ve seen two consecutive budgets that have cannibalized the future of this city in terms of infrastructure,” said Locke.

“We’ve cancelled a multitude of projects that were pre-approved, case in point the Cloverdale rinks. We just decommissioned the pool here in North Surrey with nothing to replace it,” said Hundial.

He too voiced concerns about cost-saving measures. Hundial, like Locke, has said the city ought to look at raising taxes to fund needed recreational facilities. When asked to respond to those who point out Hundial ran on a slate with McCallum, a well known fiscal conservative who pledged not to raise taxes above inflation, Hundial said it is “not flipping.”

Hundial said taxes for specific projects do not run contrary to his pre-election promises.

“I don’t remember reading that in the [Safe Surrey Coalition] pamphlet anywhere,” he said.

Given the police transition costs and impending higher operating costs of a municipal force, Hundial said, “We are going to have to look at what are some better ways to generate revenue, and everyone knows the biggest lever is going to be residential tax increase.”

Surrey has among the lowest tax base in Metro Vancouver. It also has few means to pay for improved infrastructure, as it has the least amount of net financial assets per capita in the Metro Vancouver region ($107 in 2016, compared with the average of $1,224). Surrey also has the highest debt levels in the region (borrowing from the Municipal Finance Authority). Last year, the city brought its debt down from $267 million to $229 million

On Monday, McCallum announced a one-year task force to look at ways to raise money for the city without impacting property taxes.

Should transparency and cited procedural concerns at council meetings be resolved, Locke and Hundial say “smart development” is among their key policy priorities.

“Certainly we see in Clayton that’s not the case. We’re challenged every day with our (overcapacity) schools there and a lack of recreational facilities.”

“Our roads need to be maintained and we need to start respecting our assets,” said Locke, who opposed the 2018 cancellation of a 1 % property surtax for road upgrades.

Locke has been vocal about improving services for homeless residents and community safety.

“This council has become very narrow-focused on what is public safety. It’s not just about policing. It’s about recreation facilities so we have kids with opportunity. It’s about creating a new opportunity for new refugees – Surrey has the largest refugee and indigenous population on a per capita basis in the province,” said Locke.

Hundial has been keen to establish an ethics commissioner, which is funded in the last budget.

Hundial is a first-time councillor, as is Locke. However, Locke was an MLA with the Gordon Campbell-led BC Liberals from 2001-05. The pair align themselves with the Liberal Party of Canada, with Locke running unsuccessfully three times for Surrey-Green Timbers MP. Locke also lost in the 2017 provincial election while running for then-premier Christy Clark’s BC Liberal Party.