Bolt Across Canada concludes in Delta 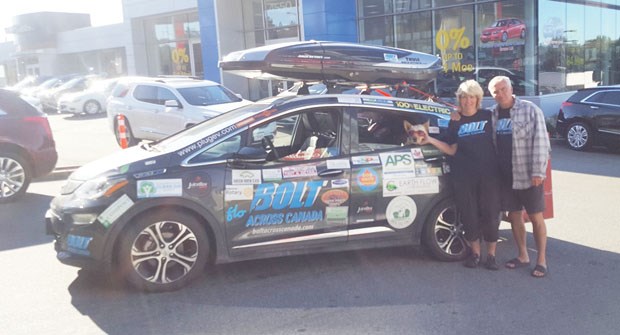 Recycling advocates Barb Hetherington, Buddy Boyd and their dog Piper travelled across Canada this summer in an electric vehicle spreading a message of zero waste. Their last stop was in Delta in late August.submitted

The Gibsons couple set out from Victoria on July 1 with their final stop in Delta at the end of August.

Boyd, Hetherington and their dog Piper covered more than 17,000 kilometres in 57 days in a Chevy Bolt EV (electric vehicle). They took to the road to spread a zero waste message, test the limits of the EV and see what was being done in other communities.

“We are always trying to promote zero waste in any way that we can,” said Boyd, who owns a recycling centre on the Sunshine Coast. “The best grassroots way is to grab the bull by the horns and just do it, so we saw this an opportunity to promote zero waste by appealing to electric vehicle enthusiasts who have already demonstrated their desire to help the environment.”

Boyd said as they stopped along the way they composted their own food scraps, used reusable cutlery and dishes — even flushable doggie bags for Piper — so when they left each community they didn’t leave a footprint.

“It was tricky because most communities talk a real bold recycling plan, but they don’t practice it,” Boyd added.

The couple met with mayors, councillors and other government officials in as many communities as they could.

He said they tried to meet with Delta Mayor Lois Jackson and her staff, but were not successful.

“It’s hard to break through. We didn’t get much response from the Metro Vancouver communities, but the fact remains that our last stop was in Delta, so I think that is pretty cool whether we met with the Delta government officials or not,” he said.

“Governments are certainly lagging behind their citizens in recognizing that zero waste doesn’t begin and end with curbside recycling.”

Boyd said this cross-Canada adventure is just the first chapter in what he hopes will be a much larger novel.

“This is only one part of the discussion,” he said. “There is an opportunity here to utilize the light that has been shone on us to bring attention to this important issue.

“The easy things are not being promoted because we have to prop up that false narrative that the government is putting out about zero waste and sustainability. It’s like taking your favourite sports team and you keep using the same lousy player, but putting better uniforms on them. We still aren’t winning, but man do we look good.”

Boyd said the trip showed that simple things can be done to change that narrative.

“From a grassroots, individual trying to make a difference, the trip was highly successful,” he said.

— With files from Sean Eckford/Coast Reporter