A group of doctors erected a massive billboard near the entrance to the Tsawwassen Ferry Terminal this week. It shows a woman sucking on an inhaler in the lee of an LNG facility.

A group of doctors and nurses have launched an aggressive billboard campaign targeting BC Ferries for burning liquefied natural gas — or LNG — a largely methane mixture they say is threatening human health and the world’s climate system.

Dr. Melissa Lem, a Vancouver family physician and president-elect of the Canadian Association of Physicians for the Environment (CAPE), says the campaign was partly in response to advertisements on some BC Ferries trumpeting the clean potential of natural gas.

“They have these massive billboards that tout the clean natural gas,” says Lem. “What’s feeding their ferries is also hurting people's health up north.”

Of BC Ferries’ 35 vessels, five burn LNG, and the gas is expected to play an important role as the fleet moves away from marine diesel and toward several LNG-electric hybrids.

When the corporation released its Clean Futures Plan in 2017, BC Ferries president and CEO Mark Collins described adopting LNG as “important climate progress.”

But with LNG set to displace more than 22 per cent of the total marine diesel consumption across the fleet, BC Ferries still doesn’t have a baseline for the total amount of emissions it belches out of smokestacks every year. That inventory is expected to be released sometime this year.

Glacier Media reached out to BC Ferries, but a spokesperson declined to comment on the anti-LNG billboard.

Far from the coast, Lem says she and her colleagues have witnessed first-hand how methane leaking from hydraulic fracking operations have impacted the residents of northern B.C., what the physician calls a “sacrifice zone.”

In one case, not long after LNG flaring began at a nearby fracking operation, a farmer developed severe nosebleeds and would nearly choke on his own blood while lying in bed, says Lem. 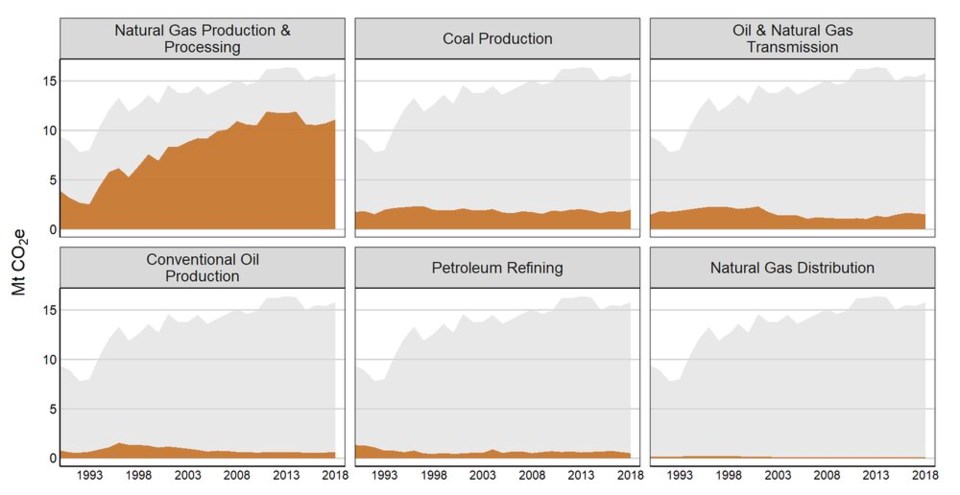 Oil and gas emissions by sector in megatonnes of CO2 equivalent from 1990-2018. Numerous studies indicate methane leaks lead to a significant undercounting of total emissions. By B.C. government

CAPE points to methane leaking everywhere along the LNG supply chain. One recent study conducted in B.C. suggested methane emissions from Canadian LNG facilities have been significantly under-counted, and could be 1.6 to 2.2 times higher than current federal estimates.

In response, the group of doctors erected a massive billboard at the entrance to the Tsawwassen Ferry Terminal Thursday morning (Aug. 12). It shows a woman sucking on an inhaler in the lee of an LNG facility.

Lem says the Pattison Group, which manages the billboards along that stretch of highway, rejected several advertisements as too provocative. One showed an image of a BC Ferries vessel, questioning "What fuels your ferry?" Another proposal presented a pot of water boiling on a gas range with the caption “natural gas is unhealthy.”

CAPE’s “Unnatural Gas” campaign is pushing for the widespread phasing out of LNG across B.C., not only on BC Ferries but for gas ranges and building heating systems across the province’s towns and cities.

That means creating a just transition for workers into zero-emission jobs, putting an end to fossil fuel subsidies, and phasing out of natural gas hook-ups on new buildings by 2025.

The group of physicians is also urging B.C. residents to sign a letter to MLAs to place a moratorium on fracking.

According to the B.C. government, the province’s fossil fuel sectors produce just under 20 per cent of all greenhouse gas emissions in the province, second only to transportation.

Critics charge LNG may burn cleaner than oil or coal over the long term, but it’s still a dangerous source of global emissions, especially when its transportation and escaped methane are factored in.

Industry spokespeople, meanwhile, cast natural gas as a part of the solution to fight climate change, one that opens up a cleaner path to get nations like China and India off coal-fired power plants.

In June, B.C.’s largest gas utility, FortisBC, advocated for a mixed gas-electric future in which the province would slowly wean itself off fossil fuels using renewable natural gas — made from food discarded in landfills, human waste in water treatment plants or wood waste from forestry. 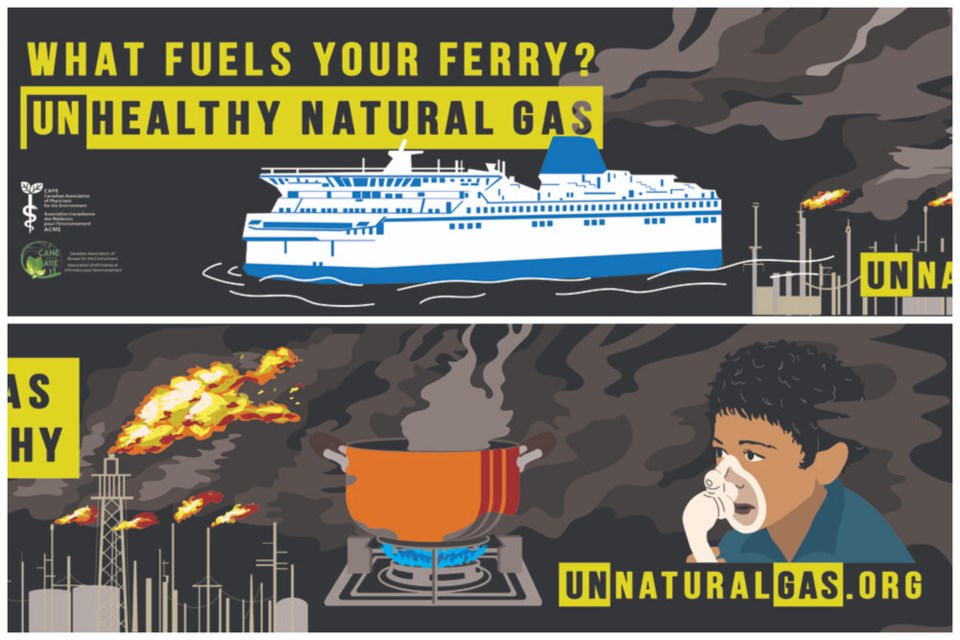 Two anti-LNG advertisements were deemed too provocative for billboards in Tsawwassen, says the group of doctors behind the campaign. By CAPE

FortisBC — which supplies BC Ferries with natural gas and has helped finance the conversion of several vessels to LNG — says keeping gas in the province's energy mix would save the region $100 billion by mid-century while still allowing B.C. to hit its climate targets.

But in a study released earlier this year, author and former government scientist David Hughes calculated the province’s oil and gas sector alone could wipe out any hope of achieving its 2050 emission target.

“Emissions from gas and oil production seem to be severely under-forecast, according to the latest Canada Energy Regulator Environment Canada data,” Hughes told Glacier Media at the time.

The campaign comes the same week the United Nations Intergovernmental Panel on Climate Change (IPCC) dropped a 4,000-page report that, among other findings, revealed the planet is warming even faster than previously thought.

While carbon dioxide has rightfully occupied the attention of the public and most climate scientists, for the first time, the IPCC report said “strong, rapid and sustained reductions” in methane emissions would help limit catastrophic warming and improve air quality.

That’s because, in the 20 years after it’s emitted, the gas is roughly 85 times more potent in its ability to warm the planet than carbon dioxide. The IPCC report says since 2007, methane emissions have steadily risen across the planet.

“There is high confidence that this recent growth is largely driven by emissions from fossil fuel exploitation, livestock, and waste...” wrote the authors of the report.

“We’re also seeing massive amounts of death from the heat dome, evacuations from wildfires,” she says.

“Subsidizing the LNG industry is the last thing we should be doing in a climate crisis.”

Stefan Labbé is a solutions journalist. That means he covers how people are responding to problems linked to climate change — from housing to energy and everything in between. Have a story idea? Get in touch. Email slabbe@glaciermedia.ca.