The redevelopment vision for the Tsawwassen Town Centre Mall will be revealed at an open house next week.
Mar 28, 2019 7:05 PM By: Sandor Gyarmati 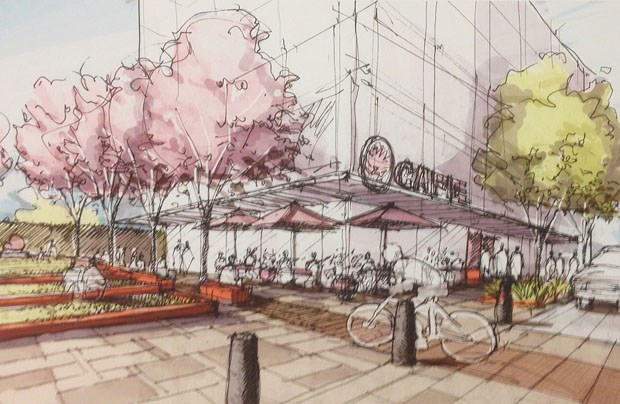 A redevelopment vision for the Tsawwassen Town Centre Mall will be revealed at an open house.Century Group

The redevelopment vision for the Tsawwassen Town Centre Mall will be revealed at an open house next week.

Hosted by the Century Group, which owns and operates the 56th Street mall, the open house there will be held on Thursday, April 4 from 5 to 8 p.m.

The master plan is for a compact village centre with ground-oriented retail and a mix of multi-family housing types above.

Century Group president Sean Hodgins took part in a Delta council workshop earlier this year to discuss his vision to redevelop the mall.

“The concepts were centered on that of an urban neighbourhood of housing with retail fronting public plazas and walkable laneways. The automobile would be subordinated as that is the basis to see transit service increase and to see local retail thrive,” he told the Optimist following the meeting.

“My intent is to come forward in early 2019 with a proposal that will allow people to consider the future of the community and the kind of housing options that are available to them and for their adult children to move back to the community,” he said.

It’s been a couple of years since he submitted what would have been the first phase of a larger redevelopment plan, a six-storey mixed-use building fronting 56th Street. That proposed building had over 11,000 square feet of commercial space on the ground level and 81 rental apartments above.

No details were available at the time on what the rest of the master plan would have looked like.

The public feedback on the mixed-use building was overwhelmingly negative, with most complaints focused on the design. Based on the feedback, Delta council rejected the proposal and told Hodgins to come back with a more detailed overall master plan.

Hodgins unveiled his initial vision for a new "green heart" for the mall back in 2015.

That concept was to change the four-hectare (10-acre) site from suburban mall to mixed-use neighbourhood. The vision at the time included several four- to six-storey structures with retail at ground level and condos above, as well as a 12- to 20-storey concrete residential tower. In total, about 500 condos were in that vision.

It was not long afterward that council approved the new South Delta Business Sustainability Strategy, which contains a series of recommendations for increased density that could potentially look favourably on a Town Centre Mall redevelopment.

In the Tsawwassen core, the current limit on the amount of multi-family units presents a barrier to creating a more vibrant mixed-use retail core, as it limits the number of potential local business patrons, a consultant who helped prepare the strategy noted.

"We would also argue that allowing for some high-rise developments in the Tsawwassen town centre can have multiple benefits, both increasing the number of residents in and around the town core, and providing visible landmarks for passing motorists on Highway 17, indicating that there is something worth seeing if they head south on 56th. Tall buildings can be a very effective wayfinding tool," the consultant’s report stated.