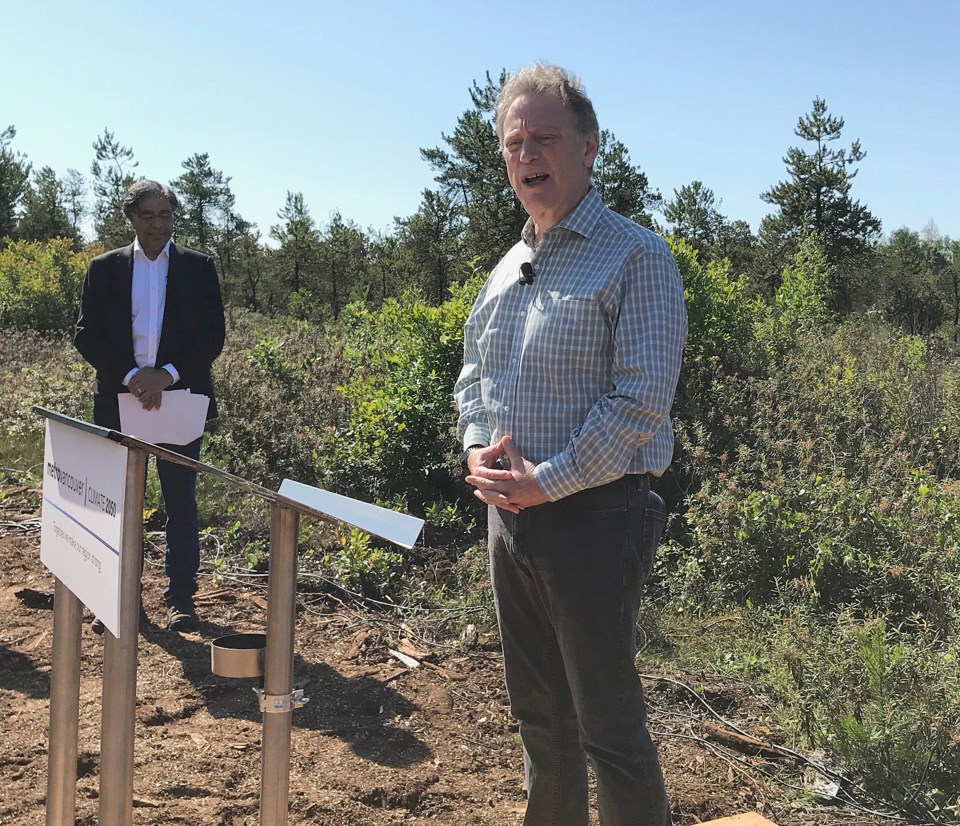 The City of Delta last summer was acknowledged for its role in helping Metro Vancouver achieve corporate carbon neutrality, attributed to projects such as the ecological restoration of the Burns Bog. Pictured speaking at the bog is B.C. Environment Minister George Heyman with Metro Chair Sav Dhaliwal also pictured. Sandor Gyarmati/Delta Optimist

The City of Delta is aiming even higher with climate targets.

That’s according to the recent Delta 2020 Climate Action Report, which outlined current and future initiatives ranging from the city’s new electric vehicle strategy to the upcoming urban forest strategy.

As a signatory to the B.C. Climate Action Charter in 2007, Delta agreed to become carbon neutral by 2012.

Delta has been carbon neutral in corporate operations since 2012.

A Community Energy and Emissions Plan was completed in 2013, which focuses on the community's efforts to reduce energy consumption related to transportation, buildings and solid waste.

In 2020, annual emissions associated with corporate buildings and fleet saw a carbon dioxide equivalent reduction of 27 per cent from the 2007 baseline, the report notes.

However, lower greenhouse gas and electricity usage in 2020, compared to 2019, were largely a result of a reduction in building energy usage due to COVID-19, the report notes.

Council last year approved an Official Community Plan update with new greenhouse gas emission targets, having the city 45 per cent below 2007 levels by 2030 and zero net emissions by 2050.

As far as Delta’s current carbon neutrality, one of the voluntary commitments of the Climate Action Charter was to achieve emission reductions as much as possible and remaining emissions are to be balanced or offset through other measures.

The report notes that under the charter, offsets may be purchased from a third-party carbon offset provider or be accounted for through a local carbon reduction project.

Delta has achieved Level 4 - Achievement of Carbon Neutrality for 2020 through the use of carbon credits from two local projects.

One project is the household organic waste collection program and the other is the Vancouver Landfill Gas Capture Optimization Greenhouse Gas Emission Reduction project.

Those actions, as outlined in the 10th anniversary edition of Caring for the Air, have led to lower levels of most air contaminants and Metro Vancouver’s achievement of carbon neutrality as an organization, the regional district states.

That report notes that in 2020 there were fewer vehicles on the road during the COVID-19 pandemic.

At the same time, however, the region experienced high levels of fine particulate matter when smoke from wildfires along the west coast of the United States blanketed Metro Vancouver and led to 11 days of air quality advisories in September.

Metro Vancouver has experienced poor air quality from wildfire smoke in four of the last six years, and climate projections for the region warn of warmer, drier and longer summers, which could lead to more intense and more frequent wildfire smoke impacts, the region explains.