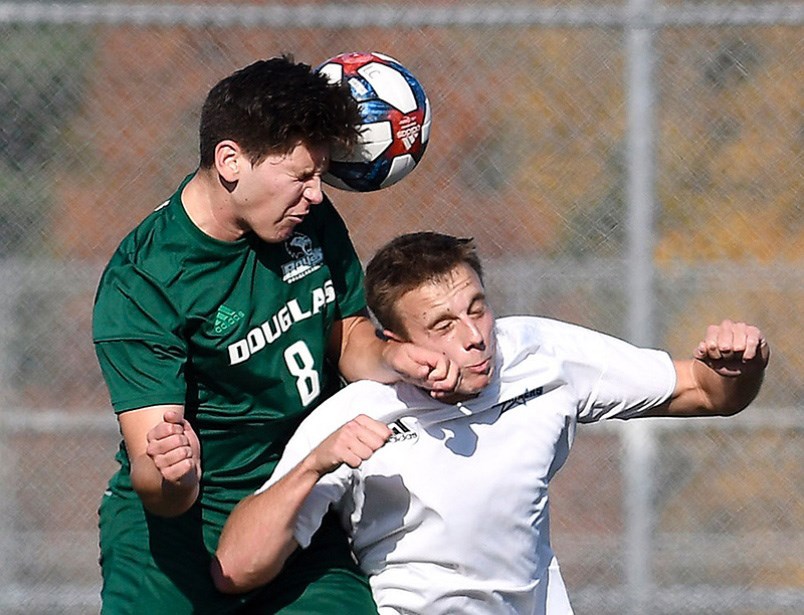 Tri-City student-athletes that play for Douglas College, like Coquitlam's Quinn Deslauniers, left, won't be able to compete for national championships this fall because of the COVID-19 pandemic.

Douglas College student-athletes may still be able to participate in their sport in some capacity come fall, but they won’t be able to compete for national championships.

The Canadian Collegiate Athletic Association (CCAA) has announced the cancellation of its four national championships scheduled for the fall because of the ongoing uncertainty about the COVID-19 pandemic. The sports affected are: golf, men’s and women’s soccer, and cross-country running.

CCAA president Vince Amato said the safety of student-athletes was foremost in the organization’s decision and those competing in fall sports won’t lose a year of their eligibility.

A decision on championships for winter sports, like basketball and volleyball, will be made in the fall.

But in a statement earlier last week, the Pacific Western Athletic Association (PACWEST) that governs sports at eight colleges in British Columbia, including Douglas, said it remains hopeful some form of return to play can happen as public health guidelines allow.

The same day, the Ontario Colleges Athletic Association announced it was suspending fall sports at all of its 27 schools. The Atlantic Collegiate Athletics Association has also cancelled sports schedules  of its 10 schools through the fall, while no decisions have been announced for conferences in Alberta, Manitoba and Quebec.

PACWEST said it has put together tentative schedules and contingency plans for the resumption of sports, but “we must proceed cautiously.”

On June 8, USports, that governs university athletics in Canada, announced the cancellation of national championships for its fall term programs, including football, men’s and women’s soccer, women’s rugby and field hockey.

Canada West, as well as conferences in Ontario and the Atlantic provinces, subsequently announced they were cancelling all team sport competitions in the first term, while a decision on individual sports like golf, swimming and cross-country will be made by July 15.