The B.C. Cranberry Research Farm had its official opening last month.
Oct 1, 2014 12:00 AM By: Sandor Gyarmati 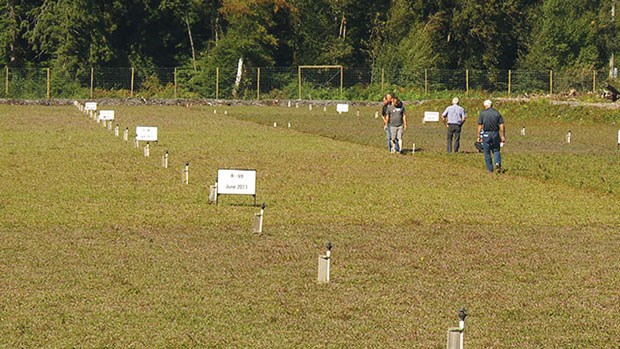 The B.C. Cranberry Research Farm opened in Ladner this month.submitted

The B.C. Cranberry Research Farm had its official opening last month. Located on 72nd Street in East Ladner, the event featured growers, government officials and stakeholders checking out the new testing facility, a site unique to Canada and just one of four such farms in North America.

The research farm is an opportunity for the industry to evaluate different varieties from other growing areas around the continent "The farm will is also a demonstration facility where current and new cranberry varieties and growing methods can be viewed and evaluated for our growers," noted a spokesperson with the B.C. Cranberry Marketing

Commission. "The current and new cranberry varieties are guided by experts in the fields of cranberry breeding, physiology and pest management. The farm will ensure that our cranberry growers are working with the best information for our climate and geography that they work in."

The new research operation is comprised of several bogs, each about two-anda-half acres in size and serviced by an underground water distribution system.

According to the B.C. Ministry of Agriculture, this province grows about 95 per cent of the cranberries in Canada. B.C. is the world's third largest producer of cranberries

after Massachusetts and Wisconsin. Cranberries are B.C.'s largest berry crop by both volume and value, as this province produces about 17 million kilograms valued at $25 million.

About 95 per cent of B.C.'s cranberries are grown for the processing market, while the rest are sold as fresh berries.

The establishment of the Delta research farm was made possible with funding from the Investment Agriculture Foundation of B.C., Western Economic Diversification and B.C. cranberry growers.