Mayor Lois Jackson was left emotional and speechless at Delta council Monday after receiving a surprise honour from the Reach Child and Youth Development Society.
Oct 18, 2016 8:52 AM By: Sandor Gyarmati 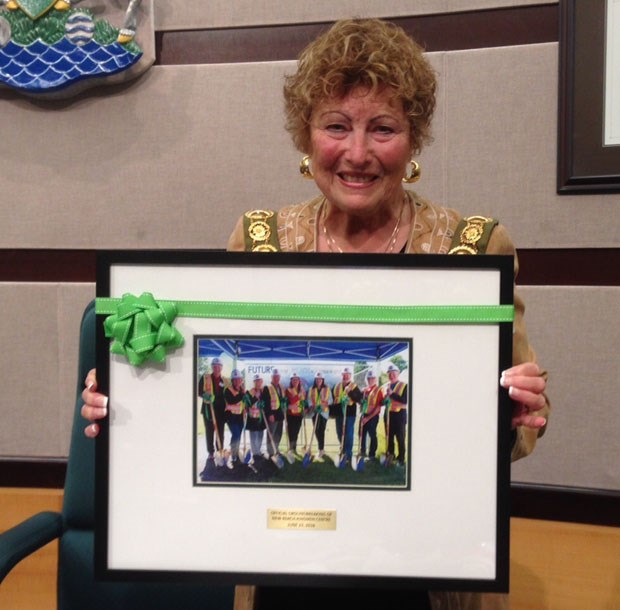 Mayor Lois Jackson was left emotional and speechless at Delta council Monday after receiving a surprise honour from the Reach Child and Youth Development Society.Sandor Gyarmati

Mayor Lois Jackson was left emotional and speechless at Delta council Monday after receiving a surprise honour from the Reach Child and Youth Development Society.

Members of the society, supporters and friends, as well as members of the Kinsmen Club, were on hand to hear a presentation by Reach representatives, who then surprised the mayor by announcing that a child development centre now under construction in Ladner will be named the Lois Jackson Kinsmen Centre for Children.

Society president Donna Burke thanked the mayor and the Corporation of Delta for its pivotal support for the centre to help children with developmental disabilities. Located at Memorial Park, the 20,000-square-foot facility, which will also have a playground, will enable the society to double the number of children and youth with special needs it serves.

“Delta’s support has been the backbone of our project, allowing Reach to leverage your commitment with other donors and enabling Reach to close the door on our $5 million construction costs,” said Burke.

Reach Foundation chair Denis Horgan said they’ve got roughly $600,000 still to go to furnish and equip the centre and hope to have it open by next fall.

Jackson thanked those in attendance for the honour, saying they’re almost at the finish line.

Reach, which also has satellite space at the North Delta Recreation Centre, is building the centre adjacent to the Ladner Pioneer Library on the former site of the Kinsmen House. It will offer therapy and counselling rooms, prevocational training, specialized lending libraries and an inclusive preschool with an accessible playground. It will also provide a new home for the Kinsmen Club of Ladner and Tsawwassen.

Delta is providing a $1 million contribution towards Reach's new facility, along with additional provisions of land, servicing, parking and landscaping, representing a further $1.3 million in value.