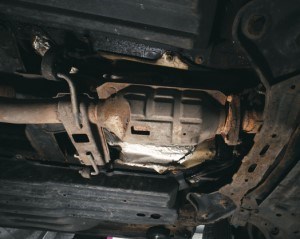 One person has been arrested and will be facing theft charges after he was caught in the act by Delta police trying to steal a catalytic converter from an RV.Delta Police/Submitted

One person has been arrested and will be facing theft charges after he was caught in the act by Delta police trying to steal a catalytic converter from an RV.

In a recent early morning call to a break and enter in the Tilbury area, DPD were told by a witness that they saw someone entering a closed and secured area of a business through a hole in the fence.

Officers arrived on scene within minutes to the Vantage Way business and could hear the sound of metal being cut by a power saw within the secure lot. Officers located the suspect in the process of removing the catalytic converter from an RV.

“The suspect was also noted to be in possession of another catalytic converter, and multiple cutting tools,” says Cris Leykauf, spokesperson for the Delta Police. “The suspect, who is known to police, was arrested for break and enter, and theft. He has been released from custody, and will be appearing in court on Aug. 5, 2021.”

DPD say the theft of catalytic converters is an ongoing issue across the region, as the salvage price of metal contained in the exhaust emission control device is currently considered high, and can be turned around for a quick profit.

Although there are no scrap metal yards in Delta, police are working on a number of initiatives to try to prevent this type of property theft. One of the most effective ways to date has been increased patrols in the middle of the night in industrial areas such as Tilbury and Annacis Island.

Police are also recommending that commercial fleet operators, and owners of RVs and large trucks have their catalytic converters etched with the vehicle licence plate. The DPD is encouraging motorists to speak with their mechanics during their next service, and inquire if etching services can be provided. District liaison officers have been speaking with local service shops who are in support of this initiative.

In addition, police are offering the following tips to protect your vehicle’s catalytic converter from being stolen: