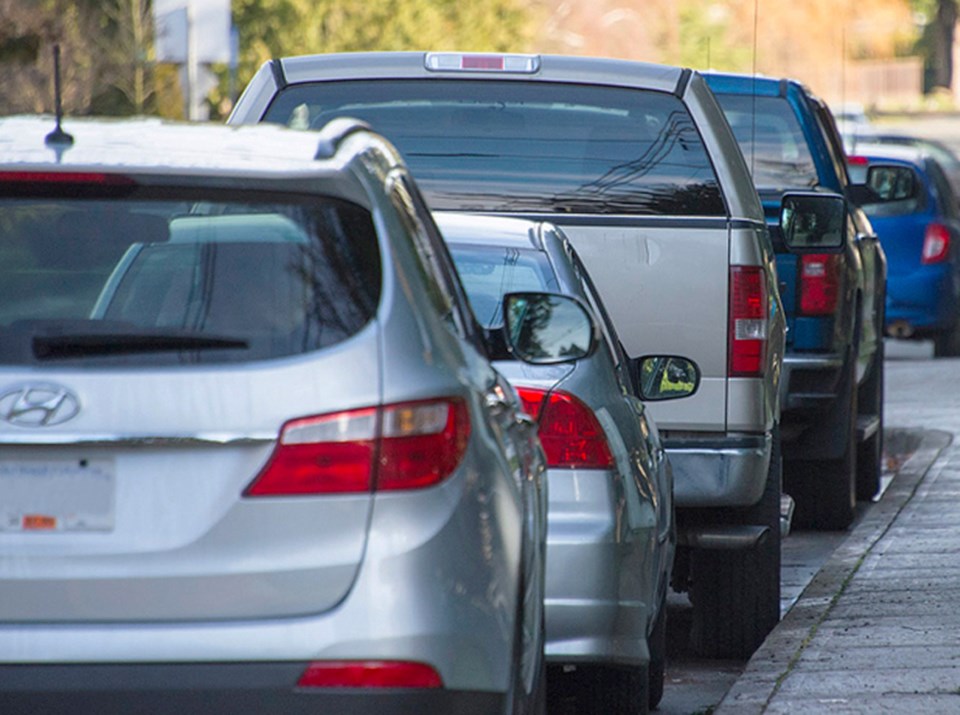 Residents and members of council who expressed concern about street parking after Delta’s secondary suite policy is relaxed said they don’t want to see their streets end up like what can be seen in Surrey. Delta Optimist file

It’s an issue that will be dealt with now that the City of Delta has amended its secondary suite policy.

That’s what Mayor George Harvie assured last Monday when it comes to parking concerns, following a public hearing on changes to the city’s suite requirements.

The amendments, which were approved and pave the way for more Delta homes being eligible to add suites, still require homeowners to provide three on-site parking spaces, but now allows greater flexibility in positioning parking for tenants.

Several speakers at the hearing as well as councillors talked about the parking issue and what it could mean for neighbourhood streets, including safety concerns when it comes to narrow streets that have no sidewalks.

Harvie said the city does have the ability to address neighbourhood parking issues, as was done in Boundary Bay when beachgoers who couldn’t find parking at Centennial Beach decided to park in the streets and roadways.

Harvie also noted the city is also behind when it comes to sidewalks, another issue that will be dealt with.

City manager Sean McGill also said the city does have the ability to act on parking complaints and impose potential measures.

He noted the first place where the city installed resident-only signs was a North Delta residential street 30 years ago, where patrons of a nearby Scott Road medical building were parking.

“And it gives you another little bit of control because when people say ‘I want seven permits’ for two residences…you want to explain that?” McDonald said.

However, Coun. Lois Jackson said it’s going to be difficult for the city to enforce parking requirements and prevent homeowners and tenants from using up the street to park their cars.

A staff report notes the property use and compliance division regularly receives residential street parking complaints, but in many cases there is no parking violation.

“Staff are able to provide warnings or tickets for violations such as parking for more than 72 hours or too close to a driveway; however, in most cases the complaints are about the inconvenience of neighbours regularly making use of the public street parking in front of their home. Staff are not able to issue warnings or tickets in those circumstances,” the report notes.

“It is difficult to link parking complaints to legal or unauthorized secondary suites as staff issue warnings and tickets to the vehicle owner by licence plate and do not confirm the vehicle owner's residential address. In general, staff have found that single detached dwellings do have more vehicles than in the past but this is true of dwellings with and without suites.”

Coun. Dan Copeland, who voted against the bylaw amendments, said people buying homes in Delta did so with an expectation there would be no parking problems.

He noted people buying into Surrey areas likely do so knowing there’s increased densification and street parking could be a challenge.