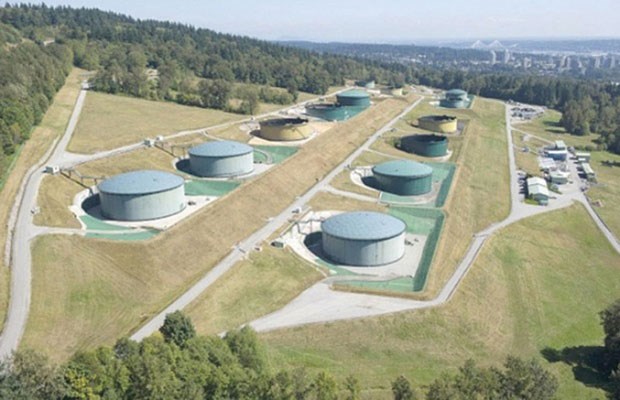 Kinder Morgan is looking to twin a pipeline to Burnaby’s Westridge Terminal.

Delta is calling on Prime Minister Justin Trudeau to suspend the review taking place for Kinder Morgan's proposed Trans Mountain pipeline expansion, but is Delta potentially setting itself up to be a fallback location?

Delta council recently endorsed a staff recommendation to support the City of Burnaby's request to ask the federal government to suspend the National Energy Board's review of the highly controversial project that would see the existing pipeline twinned to increase capacity from 300,000 barrels of oil per day to 890,000 per day. It would result in a potential increase from five to 34 oil tankers calling upon the Westridge Terminal.

The shipping lane that vessels use to reach the terminal in Burrard Inlet, at its closest point, is approximately 10 kilometres from Delta's Brunswick Point dike.

Delta is not a formal intervenor in the NEB review, which would have cost up to $245,000 in legal costs. Instead, the municipality decided to convey concerns through Metro Vancouver, which is an intervenor. Delta has noted a number of issues related to marine traffic and increased risk of spills that could impact the Fraser River estuary.

Burnaby Mayor Derek Corrigan asked Delta council to support him in asking the prime minister to suspend the review, given the fact the Liberals promised during last year's election campaign to review and amend the federal environmental review process.

If the process is not suspended by the federal government, the next step following the recent conclusion of oral hearings is for Kinder Morgan to respond to the written evidence submitted by the intervenors.

Richmond resident and environmentalist Otto Langer, who is a member of groups lobbying against several projects that could impact the Fraser River in both Delta and Richmond, including Port Metro Vancouver's proposed Terminal 2, already wrote to Trudeau about the Kinder Morgan plan, saying the NEB assessment is highly suspect.

"A fear is that the export terminal may be moved to the Fraser River estuary due to various local government pressures to get it out of the Burrard Inlet.

Both options are untenable," he said.

Kinder Morgan has, so far, stuck with its proposal to route the oil pipeline expansion from Alberta to Burnaby and gave no indication Delta is being considered as an alternate route.

However, last summer Alberta Premier Rachel Notley dropped a bombshell suggestion by saying it might be time to get creative and re-route the pipeline further south, saying South Delta is one possibility where it could terminate.

A group calling itself Concerned Professional Engineers (CPE) had already filed its opinion with the NEB that Roberts Bank is better suited as a shipping point for Alberta diluted bitumen.

Delta South MLA Vicki Huntington told the Optimist she hasn't heard anything more about Roberts Bank being eyed as an alternate location for the pipeline, but it remains a concern.

"I have no doubt the powers that be are reviewing the possibility of a pipeline to Deltaport. And the way that the minister of environment provincially has supported every major new development along the Fraser - from jet fuel to coal to natural gas - I have no doubt they will at least be sympathetic to such a proposal," she said.

Although there's been no indication from Port Metro Vancouver that Roberts Bank is being considered for an oil export facility, Delta council raised red flags about that possibility three years ago.

Later this spring, a three-member panel will inform the federal cabinet whether it approves the Kinder Morgan project, but then Ottawa must still make a decision on the $5.4 billion expansion.