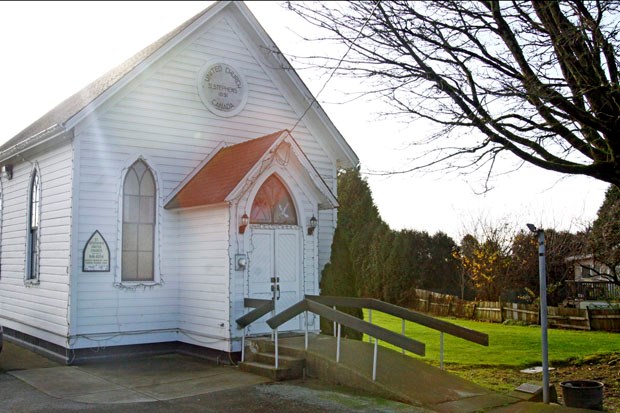 It’s been a place of worship, a place for celebration, a place to mourn and a place to gather as a community. After 128 years, however, St. Stephen’s United Church is no more.

The historic church on Ladner Trunk Road in East Delta officially closed its doors late last month. The final service on Nov. 24 was followed by an invitation-only lunch reception at nearby East Delta Hall where more than 90 people were on hand.

Lack of a full-time minister and a declining and aging congregation are just a few of the reasons why the board made the difficult decision earlier this year to shutter the church that has welcomed generations of families through its wooden doors.

Board chair Dewar Harper, vice chair Glenda Pentland and historian/church matriarch Marge Paton sat down with the Optimist just a few days prior to the final service to reflect on what the church has meant to the community and provide some insight into the future of the building.

“This was certainly not an easy decision or one that we took lightly,” said Pentland, adding it was not the first time the congregation had discussed the matter over the years. “One of the members remarked to me that it was almost a relief that this decision has finally been made. People have moved out of the community, lost touch with this community and the congregation.”

Harper said the situation at St. Stephen’s is one that is common in many communities.

“We have tried and tried, but kids today, there is too many things to do on a Sunday and church is not one of them,” Harper remarked. “One of the other factors is our minister. We had a fabulous minister in Sally McShane but she moved on because we were only able to offer her 12 hours a week. We went and advertised for a new minister, but got no response. I think that really signaled to us that a decision had to be made.”

The fabric and the glue that started it all and kept it all together these many years has now faded away, said Paton.

“There just isn’t that many people in East Ladner going to the church,” said Paton.

Harper said while the congregation will move on to other churches in other communities, the church building itself is not going anywhere.

“There is interest to preserve it,” he said. “When you sit back and you see the history and the good vibes, there is still life and purpose for the building.”

The final service was an emotional one for all involved.

“We picked Nov. 24 because the Sunday after that Advent starts, and we didn’t want to be in the middle of that or Christmas Eve being the last service.”

Harper said in the last few months the congregation was fortunate that several retired ministers were on hand to help the process along.

“For the last little while we have brought out the history of the church as we neared closer to the final day,” he said. “It has helped us understand and prepare us for this last day and celebration. It’s emotional. At one of the final Sunday services I was singing a hymn and I just couldn’t get the words out. It’s difficult, but at the same time it is reality and one must pull up their socks as they say and move on. I have been fortunate to have been a part of churches right across Canada and left behind some real valuable partnerships and then I landed here and it was very strong. I just loved it here.”

Before St. Stephen’s was built ministers of the Anglican, Methodist and Presbyterian churches ministered to the needs of East Delta, travelling long distances by foot, horse and bicycle, exchanging pulpits to help each other out.

Prior to 1891, worship services were held in a building on the corner of 88th Street and Ladner Trunk Road. That building was destroyed by ﬁre and services were moved to the school. It was soon realized there was a need for a permanent church in East Delta.

So began the history of St. Stephen’s.

The church was built in 1891 on land donated by the McKee family who were pioneers in East Delta. The McKee, Kittson, Honeyman, Robertson, Smillie, Dennis and Huﬀ families shared in giving their time and money to help get the church built.

The construction was supervised by JB Elliott and John Weaver. The lumber used was made from logs brought up from the shores of nearby Boundary Bay and a portable mill was used to cut the logs.

According to the Canadian Heritage Registry, St. Stephen's United Church is valued as a good and early example of a simple, Gothic Revival vernacular church structure. Modest in size and form, the church, with its basic rectangular plan and front-gabled roof, is distinguished by Gothic pointed-arch windows. Notably, some of the windows retain their original etched glass panes, with a small, unetched quatrefoil pattern; this glass would not have been available locally and would have been an expensive imported feature.

Typical of Presbyterian churches, the decoration of St. Stephen's was minimal and restrained. Well maintained and with few substantial changes other than a rear addition, the church remains in excellent, and mostly original, interior and exterior condition.

Pentland said the building now belongs to the United Church of Canada and will be managed by a regional council that represents the Lower Mainland.

“We were able to decide with what to do with the money left in the bank account and we will have say on what charities that money will be distributed to,” she said.

The church was given heritage status in 1989 through the City of Delta. In 2001, a heritage preservation award was presented and in 2005 the church was put into the national heritage registry.

In its final days, staff from the City of Delta archives were on hand to document some of the church’s significant artifacts, including the original pulpit bible from 1893, communion cups and trays, and the original pews.

Archival staff indicated a report would come to Delta council next year to decide how the artifacts would be preserved.

Over the years there have been thousands of Sunday services, weddings, funerals and special events. The church has been used in numerous movie productions and film crews have inquired about using it again.

“Years ago there was talk of maybe an art gallery or even a Minoru Chapel, but we don’t have the manpower to maintain it, handle bookings, etc.,” added Pentland. “This is going to be OK. There is not going to be a wrecking ball and condos going up.”

Cannabis gummies the way to go in Canadian market, says company with Delta ties
Jan 16, 2021 8:00 AM