It all comes down to politics and it is daily commuters who are taking the brunt.
Sandor Gyarmati
May 23, 2019 2:00 PM

It all comes down to politics and it is daily commuters who are taking the brunt.

That’s what Delta South MLA Ian Paton and Richmond-Queensborough MLA Jas Johal had to say about the stalled George Massey Tunnel replacement Thursday on the 60th anniversary of the official opening of the crossing.

At a media event in Ladner, organized by the Independent Contractors and Businesses Association, complete with a birthday cake, and the tunnel approach in the background, the Liberal MLAs blasted the New Democrat government’s cancellation of the George Massey Tunnel Replacement Project, which would have been well underway with a 2022 completion date.

Noting the tunnel sees over 90,000 vehicles daily with commercial trucks stuck in the gridlock polluting the air, Paton said it’s obvious the crossing is now undersized for the needs of the region.

He said it’s looking like drivers will have to wait until 2030 at the earliest before getting relief.

“This bridge would be half constructed right now and we would be on our way. Instead, the NDP has come up with study after study. Let’s redundantly review the same. We’ve already had several engineering firms who’ve done studies on this, study after study,” said Paton. 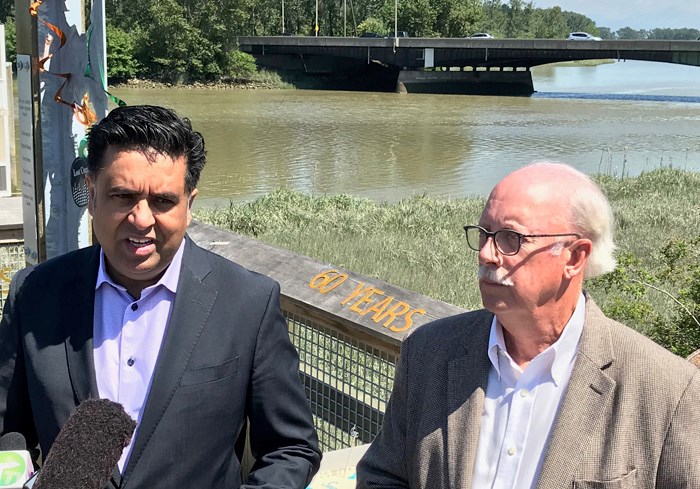 “There were always five options to replace the George Massey Tunnel and always the best option was a bridge right over top of Highway 99 with the alignment that we have today. So study after study, and now they’re thinking possibly 2030, even if they got through the studies and were to get busy building a replacement for this tunnel…how many traffic tie-ups are there going to be between now and 2030?” he asked.

Saying the NDP cancelled the bridge project, which happened to be between Liberal ridings, in favour of projects in NDP territory, Johal complained the government “is pitting community against community.”

Saying motorists and the economy will continue to suffer having to rely on the aging tunnel, which is seismically unsafe, Johal noted there’s now consensus among mayors for a new crossing but the government continues to do nothing.

Asked about concerns raised about the previous bridge project creating tie-ups elsewhere including the Oak Street Bridge, Johal responded that wouldn’t be the case if a new bridge was part of an overall package of road and transit improvements for the region.

Also on hand was ICBA vice-president Jordon Bateman who said the current underwater crossing is woefully out of date but commuters will be stuck with it for the next eight-to-10 years.

The government says details justifying a preferred option are to be outlined in a business case prepared by the Ministry of Transportation and Infrastructure, a document to be ready in late 2020.