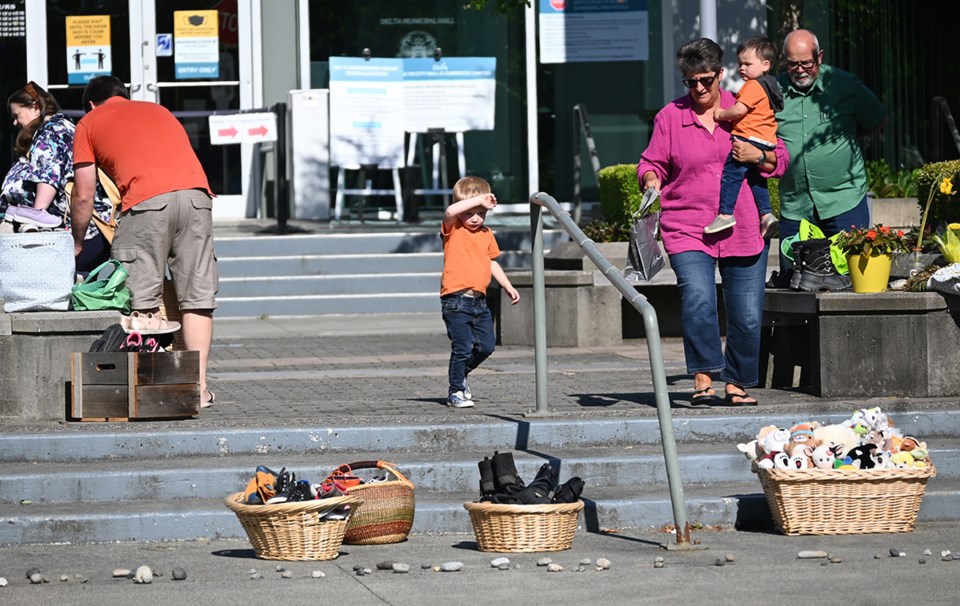 The Ladner resident and a throng of volunteers were busy early Tuesday evening disassembling the Kamloops Residential School memorial on the steps of Delta City Hall.

It was back on May 30, Mawhorter Alger suggested the idea on the Facebook community group Ladner’s Landing after learning the horrific discovery of the remains of 215 First Nations children in unmarked graves on the grounds of the Kamloops Resident School and the growing memorials across the country.

“At first I just posted it in a mom’s (Facebook) group thinking I have shoes and I’m sure all these moms have shoes and that it would be a cool memorial if we did it,” said Mawhorter Alger. “Then all these comments started coming in and my mom said I needed to reach out to all of Ladner because people are going to want to be involved and Ladner is so amazing that way.”

Mawhorter Alger and her family watched the memorial increase on a daily basis. Many others stopped by just to pay their respects and a local elementary classes also visited. A week later, 229 pairs of shoes, plush animals and other items were all gathered up. The volunteers finished their clean-up with a moment of silence.

“There is a couple of organizations that I am hooking up with that is going to get the shoes and things to Indigenous families on low income. Most of them are still usable and a lot of them are actually new as some people wanted to participate but don’t have children. There are even still tags on those shoes,” she said. “It is an amazing community and cool how everyone rallied. It was just on a whim I put that Facebook post out and everyone really stepped to the plate.”