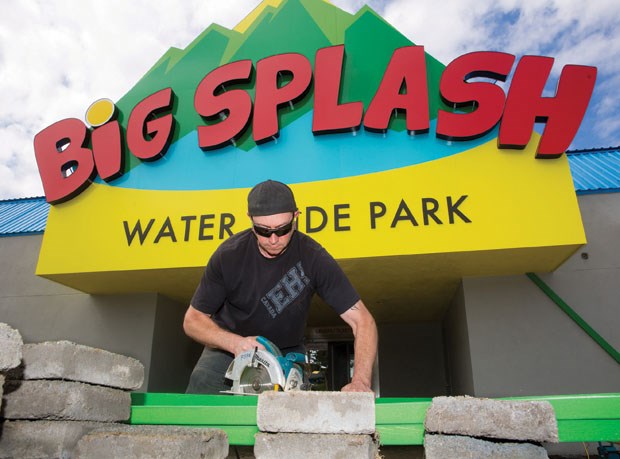 Work continues at the former Splashdown Park in Tsawwassen, where Big Splash Water Slide Park is set to open next month.Gord Goble

Big waves and big fun will be in store this summer when the all-new Big Splash Water Slide Park opens in Tsawwassen.

Construction was continuing at a steady pace when the Optimist stopped by the site this week.

General manager Harold Frederiks said the park will open to school groups on June 12 with the official opening to the public set for Saturday, June 24. After that the park will be open from 10:30 a.m. to 7 p.m. daily until Labour Day.

"The park is starting to come together," Frederiks said. "The winter and early spring hasn't cooperated weather-wise, but we are hustling and we will get it done."

Last September the taps were turned off at Splashdown Park for what appeared to be the final time. But in January, Executive Hotels & Resorts announced the park would be re-opened as Big Splash.

"It's really exciting, especially for myself," said Frederiks. "I was with Splashdown for many years so to see the transformation happening and the park getting a major makeover is really cool to be a part of."

"We are not just catering to the locals here in Ladner and Tsawwassen, we are catering to the whole Lower Mainland," Frederiks said. "We are looking at being a major destination for entertainment, shopping with the new mall and golf at Tsawwassen Springs."

Phase two of the project will see some new slides in 2018 with phase three, the opening of a boutiquestyle hotel, set for 2019.

"When Executive took over it was very exciting for so many people. We all thought, including myself, that Splashdown was done, but Executive has come in and stepped up," Frederiks added. "They want to really be a part of this community."

Admission has been set at a flat rate of $28 per person, with children under three free. As news of the park's re-birth spread, some expressed disappointment on social media that season passes will not be offered.

"At this time we will not be offering year passes, but that doesn't mean we will not be offering them in the future," Frederiks said. "This is a whole new attraction. We are trying to get our feet wet with new ownership and we are really trying to find out what works best for everybody. We think we have set a very reasonable rate for people to be entertained for the whole day. We have so many cool things going on here. When we open and when people come through the gates, I think they will be amazed at the facility and what we have to offer."

For more on the park, visit www.bigsplashwaterpark.ca.