Public has until tomorrow to provide written submissions on contentious Southlands proposal
Nov 6, 2013 12:00 AM By: Sandor Gyarmati 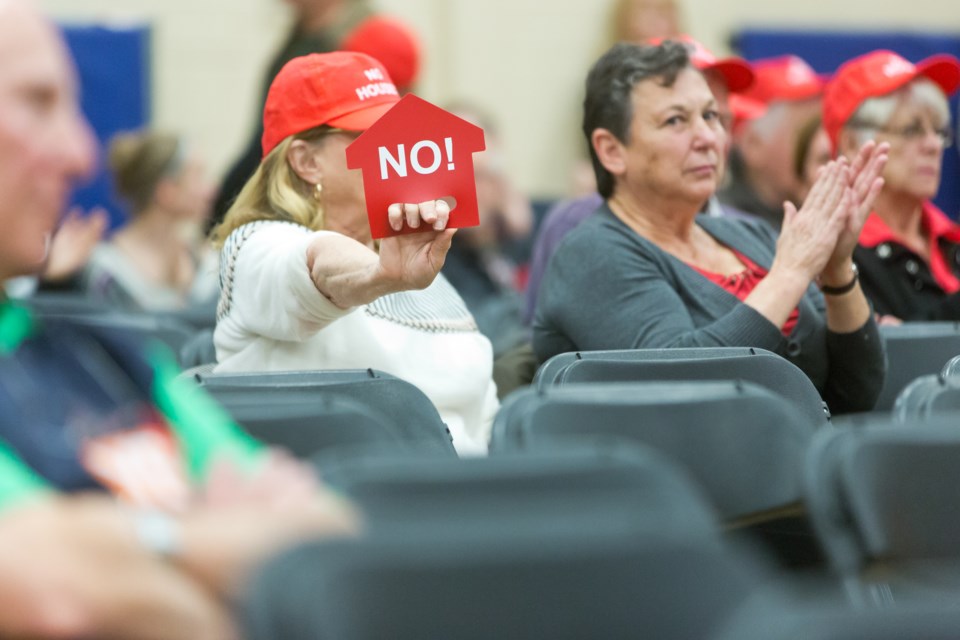 Tomorrow will be the last chance for residents to have their say on the controversial Southlands development proposal, but in writing only.

On Saturday afternoon, well into the fifth day of the public hearing at the South Delta Recreation Centre, Mayor Lois Jackson announced it had been decided that enough oral presentations had been heard.

Written submission will be accepted until noon on Thursday at municipal hall. Delta council will reconvene the hearing on Friday at 9 a.m. at the hall to ask any further questions from staff and consider officially ending the hearing. A special meeting will then commence to consider further action.

The public hearing lived up to advanced billing, showing just how divisive the issue has become. Starting last Monday, but taking a break for Halloween on Thursday, it drew large crowds throughout the week.

It was obvious the application by the Century Group, although different than previous development pitches, has fierce resistance. This time around, however, there's also been significant support, with both sides acknowledging the division in the community.

After almost 400 people made it to the microphone, the number of speakers in opposition outnumbered those in support by an almost 60-40 margin.

The Century plan calls for 950 housing units while transferring 80 per cent of the 217-hectare (537-acre) Tsawwassen property to Delta, much of it for farming. The mix of housing would be constructed in an area reported to have the poorest soil quality, but it's also next door to the existing

Boundary Bay neighbourhood, which came out to oppose the plan.

Raising questions over how much of the acreage would end up as farmland, opponents, many wearing red baseball caps reading "No Houses," insisted the entire site can and should be farmed.

They also cited traffic, flooding and wildlife concerns. Questioning the affordability of the new housing, they noted the development is in the wrong location, suggesting more density be added to the town centre.

Supporters said a greater variety of housing is needed for young families and downsizers, while pointing out that poor agricultural land would not only be improved but put into public hands.

Gordon Spetifore, whose family originally owned and farmed the property, described drainage and soil problems, noting their operations didn't have as good yields as other farms. Brent Kelly, who currently farms the site, also noted problems, including losing tens of thousands of dollars recently due to flooding.

Supporters, many wearing "Yes" stickers and some sporting green T-shirts, accused opponents of being NIMBYs, a claim that was strongly refuted.

Following the conclusion of Saturday's session, Century Group president Sean Hodgins told the Optimist he was surprised and humbled by the number of people who came out to show support.

Although many who spoke clearly felt strongly about the issue, the hearing was largely civil with only the occasional bemoaning and jeering.