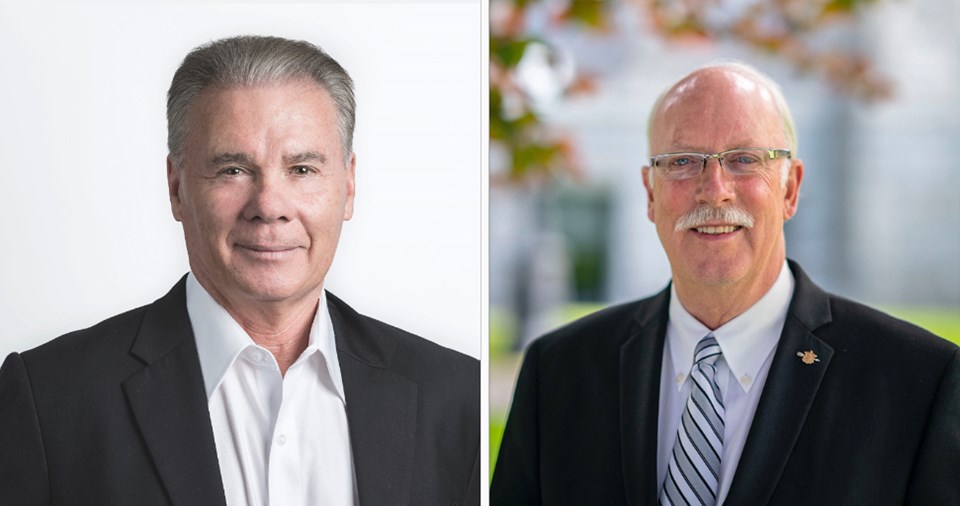 Delta Mayor George Harvie says he’s angered by the latest move by the Delta Hospice Society’s board, while Delta South MLA Ian Paton says there’s many questions about the pending funding cut that need answers including how disruptions to patient care will be mitigated.Delta Optimist file

The leadership of the Delta Hospice Society intends on having their own way, or else remove local hospice beds for Delta residents.

That’s what Mayor George Harvie is saying about the latest development in the society’s ongoing heated saga, which has now seen employees at the Irene Thomas Hospice in Ladner getting layoff notices from the society’s board.

“To me, that is just shameful,” said Harvie.

Having discussed the hospice issue with Fraser Health in recent weeks, as well as Delta MP Carla Qualtrough and MLAs Ian Paton and Ravi Kahlon, Harvie said, “My next step is to act as mayor with the support of council.”

Opposed to the actions of the current board over the past year, council last summer agreed to deny the society a municipal permissive tax exemption for the hospice’s thrift store in Tsawwassen.

The society’s board on Friday morning issued a news release stating it had been compelled to issue the layoff notices and that “Fraser Health is about to evict us and expropriate approximately $15 million of our assets simply because we decline to euthanize our patients at our 10-bed Irene Thomas Hospice in Ladner, B.C."

Paton said he’s deeply concerned about the layoff notices to the hospice’s dedicated staff and is disappointed in the board for resorting to such a drastic action.

“To be clear, these layoffs are a direct result of the negligence of the Delta Hospice Board, led by former People's Party of Canada candidate Angelina Ireland. Despite numerous opportunities to work with Fraser Health towards a resolution, this ideological board is determined to use the Hospice as a pawn in their far-right crusade against ‘political correctness’,” said Paton.

“The negative and divisive rhetoric pushed by Ireland and her board has no business on this side of the border,” he added.

The board is opposed to providing the legal procedure medical assistance in dying (MAiD).

Fraser Health has mandated that non-faith based hospices offer MAiD to those who ask for it, putting Delta Hospice on a collision course with the health authority and the province, which announced last February that the society would lose its funding by Feb. 25, 2021.

The society will also not be permitted to provide palliative care service.

Paton also noted that many questions about the impending transition are still unanswered, so he personally contacted Health Minister Adrian Dix, representatives from Fraser Health, and senior staff with the Ministry of Health requesting further information.

Fraser Health spokesperson Carrie Stefanson told the Optimist in an email late Friday afternoon that the health region’s priority is the well-being of patients receiving hospice care and their families, as well the community of Delta.

“At this time, our focus continues to be on the care provided to our patients at the hospice during the final month of the notice period and any contractually provided transition period, in accordance with the hospice service agreement provisions. We are working on a transition plan and will have more to share soon. We have made repeated efforts to work with the current Society, including the plan for staff. These efforts have been unsuccessful,” Stefanson explained.

“We will work with the provider and the union to ensure all hospice staff who received layoff notices from the Society will have employment opportunities within Fraser Health if they want them.”

The Optimist had also made a recent request for information from Dix, and also asked for comment from Kahlon about the layoffs.