For the second time in a month a COVID-19 exposure has been reported at Delta Secondary school along with four other exposures at Delta elementary schools. In a letter sent to parents on Oct.
Oct 19, 2020 11:04 AM By: Cameron Thomson 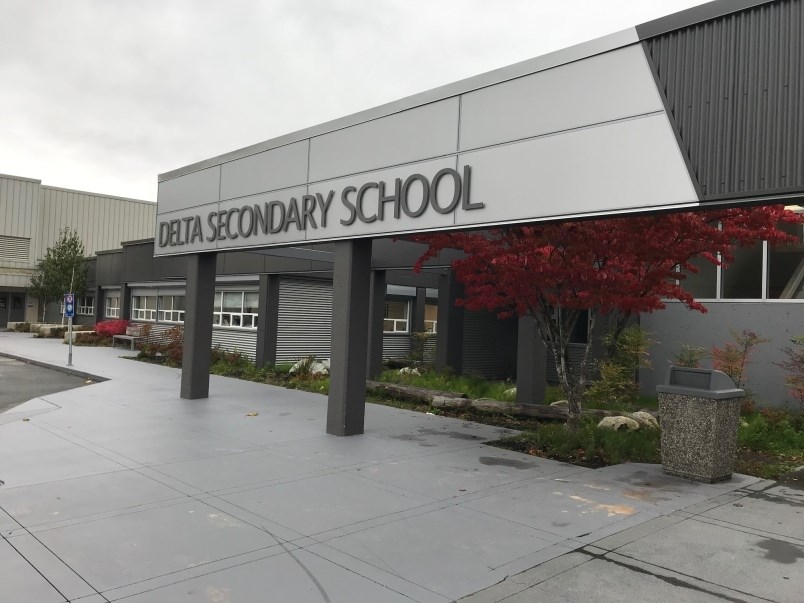 Another COVID-19 exposure case has been reported at Delta Secondary.Optimist file

For the second time in a month a COVID-19 exposure has been reported at Delta Secondary school along with four other exposures at Delta elementary schools.

In a letter sent to parents on Oct. 18, Fraser Health advised on the next steps following exposures at Delta Secondary and Heath Traditional Elementary, which took place Oct. 13.

The letters stated the public health authority has initiated contact tracing to identify any staff and students that need to self-isolate or self-monitor for symptoms as well as continuing to investigate the exposure itself.

Fraser Health will only phone staff and students that have been identified as needing to self-isolate for 14 days from when they were exposed. Letters may be sent to staff and students who will be asked to self-monitor for symptoms.

This comes with previously reported exposures at Richardson Elementary school on Oct. 1, 5, 6, 8 and 9 and Jarvis Traditional Elementary between Oct. 5 and 7.

A notification letter was sent to Jarvis parents last weekend, while on Wednesday, Oct. 14, Richardson parents were sent a letter by the school’s principal.

On Friday, Richardson principal Patricia Wilson sent an updated letter to parents, which stated that one class has been instructed by Fraser Health to stay at home and self-isolate.

Wilson said that the school would be reaching out to all the students in the affected class to provide learning support to students while they are self-isolating.

In response to the now six exposures of COVID-19 at Delta schools, Susan Yao, president of the Delta Teachers' Association said teachers are concerned about how they are not always part of that contact tracing network.

“If it's a younger class, [Fraser Health] only contacts students to ask them who they were sitting near. Teachers would like to be a part of that process,” Yao said.

Yao said the Teachers Association would like to see faster testing and faster confirmation of cases, in an effort to decrease the lag time between an exposure event and the public notification.

“A rapid test would allow a measure of security to that teacher to be able to go back to the classroom and feel like they weren't exposing someone else to illness,” she said.

Yao also wants to see masks required in all classrooms.

“I think teachers would feel probably a lot more secure if they knew that everyone was wearing a mask and that's still not happening,” Yao said. “The reason why that's not happening is that it's not a requirement by the provincial health authority.”

Delta school board chair Val Windsor said while it is worrying to see more exposure events occurring in schools, as Dr. Bonnie Henry pointed out last week, we have not seen transmissions within schools, so that indicates the risk in the school setting is still quite low.

“What we are seeing in schools is a reflection of what we are seeing in our communities - a general increase in COVID-19 cases,” said Windsor. “We are extremely thankful for the support and guidance of Fraser Health as we navigate this pandemic. Their exposure letters are intended to let staff and families know that an individual with a confirmed case of COVID-19 has attended a particular school, but it is important to understand that it does not necessarily mean that everyone has been exposed to the illness. Fraser Health is doing a tremendous job with their contact tracing. They will quickly contact staff and the parents of students who have been in close contact with someone who has tested positive to let them know what they should do next, and that can vary depending on each situation.”

Superintendent Doug Sheppard said while no one wants to see an increase in the number of confirmed cases, everyone should use it as a warning against complacency.

“I would encourage staff and students to continue to be vigilant in following the health and safety measures outlined in the school district's COVID-19 Safety Plan, which includes increased hand washing, and wearing masks and maintaining physical distance from others in common areas,” he said. “I think the most important message we have been sharing with our staff and students is to stay at home if they feel ill. It is the best way we can help to keep COVID-19 out of our schools.”

-with files from Ian Jacques