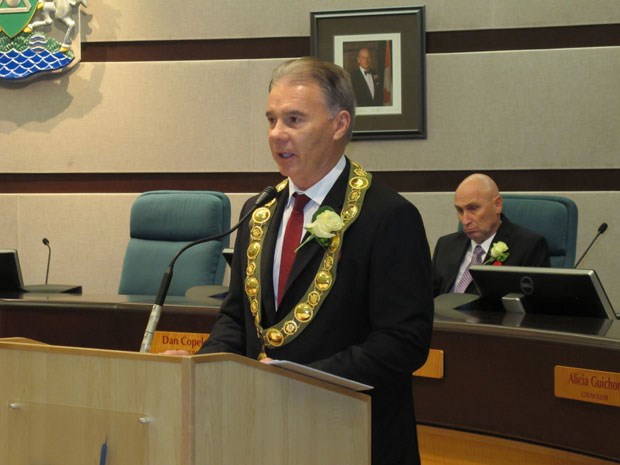 Harvie and the rest of the new Delta council were sworn in Monday night at city hall in Ladner in front of more than 200 invited guests, family members and friends.

Harvie was the first to recite the oath of office and oath of allegiance as Justice Barbara Norell administered the proceedings.

He was then officially introduced as Delta’s mayor and presented with the chain of office.

Harvie said it was a “privilege and an honour” to stand before the community as Delta’s new mayor.

“It has taken a tremendous amount of work and team effort to arrive at the council table tonight and I am grateful for the trust this community has placed in me,” he said. “I would like to congratulate the members of council – those who are returning and those who are joining us for the first time. You are taking on one of the most important jobs public life has to offer and I’m looking forward to working with you.”

“Under Mayor Jackson’s leadership we have seen Delta grow and prosper into the incredible city we know today. Our task as a new council, and my personal commitment to you, is to preserve and build upon this outstanding legacy,” he said. “I am very excited for the next four years, working with council to make positive changes planned for our community.”

Harvie then highlighted his priorities: keeping taxes low and Delta debt-free, working to keep young families and seniors in Delta, investing in new sports fields, tracks, and recreation facilities, keeping Delta safe, holding every other council meeting in North Delta, and achieving a replacement for the tunnel.

He said the first task as council will be to set a 2019 budget at a workshop in early January.

“This will set the groundwork for the next four years and will take Delta to a new level of excellence. I am committed to keeping taxes low, keeping Delta debt-free and putting the needs of Delta’s residents first,” Harvie said.

Harvie will seek to establish a public safety and community issues committee to work closely with the police and fire departments.

In terms of enhanced recreation services, Harvie said council will structure a four-year financial plan that will invest more in Delta’s sports and recreation facilities, including turf fields, running tracks and other outdoor activities that encourage fitness and social health.

In what he called a “refreshed” parks recreation and culture commission, Harvie wants to see expanded and enhanced pickle ball facilities to provide 28 dedicated courts at 11 parks in the next four years, establishing a Delta families first policy to give Delta residents better access to facilities and establishing off-leash dog parks that are fenced and lighted in both North Delta and South Delta.

“Tonight, I have presented my priorities as mayor and working with council I look forward to achieving these results for Delta. Now it is time for me to get to work,” he said.