No refuge for Tri-Cities' homeless as arctic temperatures near

Homeless advocates call on cities of Port Moody, Coquitlam and Port Coquitlam to roll out an emergency shelter as sub-zero temperatures are expected to dip as low as - 25 C
Feb 10, 2021 3:25 PM By: Diane Strandberg 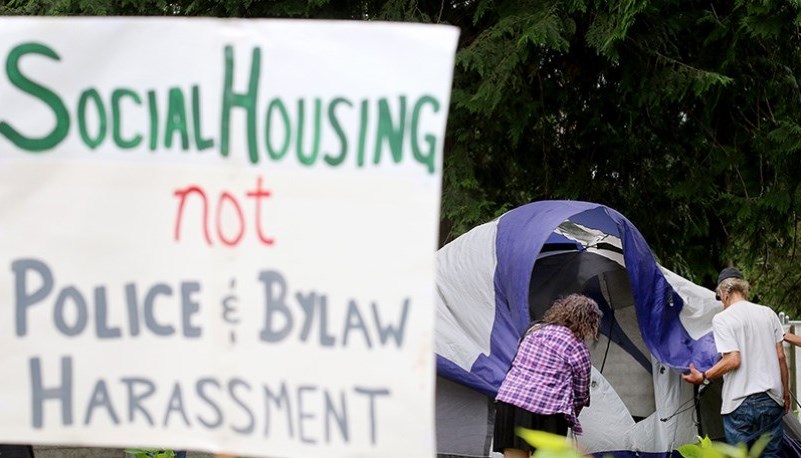 Homeless and homelessness advocates begin erecting an encampment next to the 3030 Gordon shelter in Coquitlam, June 13, 2019.Mario Bartel/Tri-City News

Advocates are laying blame for the lack of emergency shelter space for homeless people this winter at the foot of Tri-City city councils.

As a trough of cold arctic air and snow bears down on Coquitlam, Port Coquitlam and Port Moody, advocates are calling on local governments to urgently open up a minimum 2,000 square feet of space, with a small food preparation area and washrooms for dozens of people left out in the cold.

“Locations have been suggested and for whatever reason, they’re just not willing do it,” said Polly Krier, coordinator of the Tri-Cities Homelessness and Housing Task Group, who said efforts to find space large enough to house homeless have been going on since COVID-19 hit last March.

Port Moody briefly considered opening up a short-term shelter but it hasn’t become a reality, according to Krier, and Coquitlam has discussed options such as the former Riverview Hospital. But that’s not practical in the short term given the lack of heat and light in unused facilities, she said.

In the meantime, she said, agencies are running out of bus passes to give to people to travel to other cities to find shelter. Unseasonably low temperatures are expected to sink to as low as -25 Celsius Wednesday night when factoring in wind chill values.

Despite the urgency, Port Coquitlam Coun. Glen Pollock said it’s been a challenge to find shelter space, and though he’s worked with BC Housing to identify possible locations, nothing has been found.

Pollock said the city doesn’t have any unused space; Hyde Creek and the Port Coquitlam Community Centre are both open for recreation programs and Elk’s Hall, near city hall, is unheated and being used by non-profits for food distribution.

“We are very serious about this,” Pollock said, “but finding a solution is difficult.”

In Coquitlam, shelters are currently in operation, and although full, are able to house up to about 70 people, including rooms in a COVID-19 response shelter at a Coquitlam hotel and a permanent shelter and transition housing at 3030 Gordon.

Those who find themselves without somewhere to go are being sent to shelters outside the city, according to Andrea Corrigan, coordinator with the Hope for Freedom Society.

“Outreach has been working tirelessly to find housing or shelter spaces for folks. With no EWR (Extreme Weather Response) spaces made available, and the local shelters largely full, we unfortunately don’t have anywhere in the community to direct people during the cold snap and so are directing people to additional EWR spaces in New Westminster, Burnaby and Surrey,” stated Corrigan in email.

Still, advocates are pushing for a solution as the pandemic creates more need and winter's chill makes living outdoors dangerous.

Judy Johnson, who ran an emergency shelter during cold snaps at Trinity United Church in Port Coquitlam for three years until it was shut down due to COVID-19 restrictions, said the need is dire, and she is worried for people left out in the cold.

In a letter to Coquitlam, Port Coquitlam and Port Moody councillors, MPs and MLAs, Johnson stated that there is funding to operate a shelter, an agency willing to run it, trained staff, clothing, mats, blankets and some basic food items, as well as volunteers willing to help and transportation available.

What’s needed, she said, is space to host a shelter.

She believes cities have unused space that could be used but aren’t prepared to provide it.

“The timely creation of a shelter in a city facility would be a mark of that city’s concern and respect for the homeless,” she writes in her letter. “But Port Coquitlam, Coquitlam and Port Moody cannot find room for the homeless anywhere.”

Both Krier and Johnson say they appreciate the effort cities have made to at least discussing the problem, but the lack of action, especially this winter, is disappointing.

With neither the Trinity emergency weather shelter nor the Bridge shelter running at local churches due to COVID-19, the hope was something else could be found to fill the gap.

“I feel I’ve done everything I can to prompt the politicians to move on it,” said Johnson. “I finally said, ‘it’s damn cold out there and I just can’t sit around anymore.’”

Port Coquitlam’s Pollock said he hopes local churches, which have been helpful in the past, can find some space, even with accommodations for COVID-19 restrictions, and he believes his city would agree to these shelters as they have in the past.

But Johnson said churches have born the brunt of providing shelter in the Tri-Cities for the last 15 to 18 years, housing up to 20 to 30 people a night, and even if the pandemic was over, she doesn't think housing homeless should be the church's responsibility.

She said she’d like to see more effort from city councils on the issue.

“I had expectations last fall that people would have listened; that’s not happening, this is where the rubber meets the road.”

In Coquitlam, a spokesperson for the city said it's working on a number of initiatives to “improve access to programs and resources for those in urgent housing need and towards improving access to affordable and appropriate housing options for all.”

Among its efforts is to provide information on its website, support homeless through its bylaw officers and provide washrooms and port-a-potties.

“The practice is to attend camps and talk to people who may be living there to connect them with resources in the community,” said the spokesperson.

Port Moody has also had a number of discussions in recent months, including trying to set up a warming centre or an emergency shelter — efforts Krier said she is proud of — but the initiatives have yet to lead to any solutions.

Meanwhile, local agencies are doing what they can to keep people safe as temperatures drop.

Blankets are being handed out to local homeless living outdoors in the Tri-Cities while RCMP and bylaw officers are doing safety checks.

Krier said the recent spate of cold weather has prompted some homeless to welcome others into their camps while others who are on their own will walk at night to stay warm and sleep during the day, when it’s bit warmer, to avoid freezing to death while they sleep.

“The weather’s treacherous, what can we do?” asked Krier.