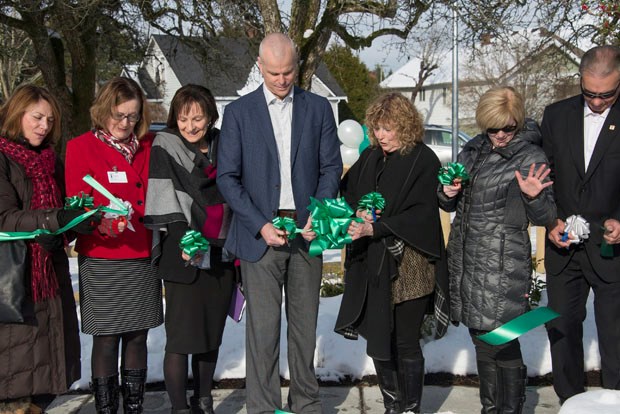 A new inclusive space for children with special needs was officially unveiled in grand fashion last Saturday afternoon in Ladner.

The three-storey, 20,000-square-foot-centre on 47th Avenue adjacent to the Ladner Pioneer Library will allow the Reach Child and Youth Development Society to help even more children and their families.

The centre will also be the new home of the Kinsmen Club of Ladner/Tsawwassen.

Those in attendance Saturday enjoyed tours of the building, food and drink, and entertainment.

Reach Foundation chair Dennis Horgan, who served as master of ceremonies, said the efforts of the whole community brought the society to this point.

“Within Delta it takes a city to raise a child and we would not be here today celebrating this momentous milestone without the generous support of all levels of government, our business community and community organizations. We are truly humbled by the generous support and caring hearts of our supporters,” said Horgan.

Delta South MLA Ian Paton quipped that he’s usually auctioning something off when he attends a Reach function.

“I’m so proud to be here and I’m so proud of this new facility,” Paton said. “Every day I get to brag to my colleagues in Victoria about how special a place Delta is. Getting to this point was a real community effort. How fitting that this new building has been named the Lois E. Jackson Kinsmen Centre for Children, a nod to a woman who has devoted her life serving our community. This centre is an integral part of her legacy.”

Jackson was humbled by the honour, saying she was delighted to welcome everyone to such a special occasion.

“Our treasure is our children. Since I moved to Delta with my own three children in 1969, treasuring Delta’s children has been a top priority for me,” she said. “What an honour it is for me therefore to have my name on this very special building for very special people.”

Jackson also paid tribute to Reach executive director Renie D’Aquila, presenting her with a bouquet of flowers as a token of thanks.

“This building could not have been a reality without Renie,” added Jackson. “This woman has had a passion for children and a passion for building this dream. She has left no stone unturned. In her quiet and dignified way, Renie has brought this dream to reality. How can we thank-you enough for your selflessness and your caring spirit.”

Later in the afternoon the inclusive playground was officially opened and a special memorial plaque was unveiled in the community room in honour of late Reach Foundation director Norman Stark.

Stark was instrumental to the success of the capital fundraising campaign.

The memorial plaque includes a carved oar. Painted on the oar is an orca whale with abalone inset by Williams. The paddle signifies Stark’s extensive involvement in the port and the shipping community. The paddle also represents both a journey and moving forward towards a common goal. A paddle goes hand-in-hand with a canoe, which symbolizes teamwork. In addition, the painted captain’s wheel signifies the skipper or in this case Stark’s leadership. The orca symbolizes family, community and protection and his connection to Reach.