Putting some risk back in play 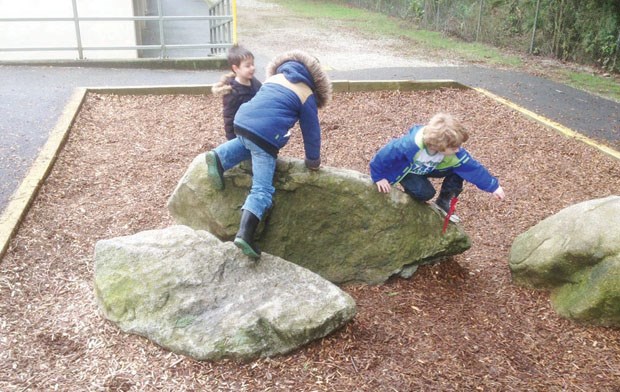 Playgrounds are going old school these days as research suggests society has become too protective of children.Sandor Gyarmati

It's time to stop bubble wrapping our kids.

That's the rationale behind Delta's move to encourage new types of playgrounds, ones that are more of a throwback that reintroduce risk through natural play.

"There's more studies that indicate that kids don't know their risk tolerance level and we've had experts and various reports and speakers to our (parks, recreation and culture) commission from the University of British Columbia indicating that we've become so protective of our children that they don't understand where their risk tolerance is," he said.

"One of the ways we can reintroduce kids to risk is to create playgrounds that are a little bit more adventurous.

"It doesn't make them unsafe but creates an opportunity for them to climb out on a ledge or up a balance beam or up a stump of natural logs. The studies also indicate that this is a really important developmental aspect of children as they reach challenges later in life, so they'll have better coping mechanism as well when faced with societal challenges," Kuntz said.

The new policy encouraging more natural play features in playgrounds is now part of cost-sharing agreements the municipality has with parent advisory groups. Delta's policy remains unchanged for a standard playground as those projects will continue to see the municipality contribute 50 per cent to a maximum of $35,000. However, for a playground using more natural play elements, Delta would provide up to $45,000 as well as up to $5,000 for a professional landscape architecture service to come up with the design.

Kuntz told the Optimist natural play spaces that reintroduce risk into children's play can already be seen around the Lower Mainland, including at Simon Fraser University and at Terra Nova Park in Richmond. Delta council has approved a North Delta Lions Club proposal to introduce natural play elements into the existing playground and waterpark at Annieville Park.

Research from UBC and the Child Family Research Institute at B.C. Children's Hospital concludes that risky outdoor play is beneficial for children's health as well as encourages creativity, social skills and resilience.

A Delta staff report notes experts say too many rules and standards governing how high or how fast a child can go brings too much order to playgrounds, making them unappealing to children.

"The experts say poor professional responses to tragedies is behind the mind shift to bubble wrap children. This resulted in a change in perception of kids being confident and independent to being vulnerable and needing to be overly cared for," the report states.