More than 100 residents along with community advocacy and disability groups were on hand at Ladner United Church Monday morning for a chat on accessibility and the new Accessible Canada Act.
Aug 20, 2019 6:35 PM By: Ian Jacques 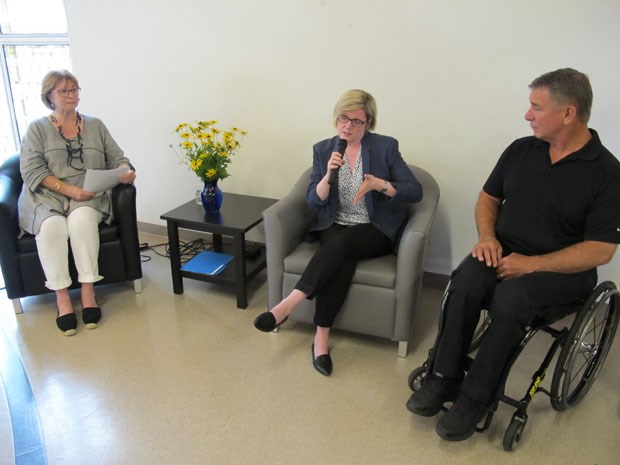 More than 100 residents along with community advocacy and disability groups were on hand at Ladner United Church Monday morning for a chat on accessibility and the new Accessible Canada Act.

The event, which focused on how leadership and local action can make a difference in communities when it comes to accessibility, was on the heels of the federal government passing the Accessible Canada Act, which Qualtrough, the minister of public services and procurement and accessibility, worked on for more than two years.

“Early on in the summer I reached out to Rick to host an event in my community to talk about how we can make accessibility local. I’ve been dealing with it from a federal level in creating this new law and it’s been wonderful and engaging, but really talk about what people can do in their businesses, in their organizations and how Rick’s leading the charge on accessibility standards,” Qualtrough told the Optimist in an interview prior to the moderated discussion.

“The work we are doing is very complementary, so just getting out to a community and taking it local is very important.”

Hansen said it’s a chance to punctuate this milestone moment for accessibility rights.

“Those of us who work in translating those incredible words and those laws and policies into action plans and deliverable products in the grassroots community, we are thrilled about that because it gives us energy, it gives us guidance. It actually delivers us a mandate to be able to work with other sectors, especially dropping it down to local communities.”

Hansen, an advocate for the disabled best known for a two-year, round-the-world odyssey in a wheelchair in the 1980s, said when the act was passed, everyone within his foundation was elated.

“It’s the greatest thing that has happened for people with disabilities in Canada, and by nature of Canada’s role within the world, in a long time,” he said. “I’m super proud of my country, I’m proud of Carla and the government and the disabled community and other sectors who worked hard to cross the line. When I say line, I mean the starting line of the next level, so this is a strong statement of where Canada is going and now we need to execute and deliver.

“That’s why this follow-up is so timely because the words and the legislation are super critical. We all need to interpret and do our part because Canada doesn’t happen just because of government alone, it’s multiple jurisdictions and sectors and people want to feel they have a part in this journey.”
Both agreed there is still lots of work at the local level to improve accessibility for all.

“People have now come to see me as champion for this issue, not just locally, but around the country,” said Qualtrough, a former Paralympic swimmer. “A lot of this isn’t federal jurisdiction, so you have to build relationships with other levels of government, with the private sector, with non-profits.”

Hansen said we need to speak the same language and ultimately find ways to activate the sectors that haven’t addressed these issues.

“In the build in environment, for example, designers, the city planners don’t have any fundamental training regarding accessibility so we need to arm them with the same tool kit so we don’t have these huge gaps,” he said. “We need to train everyone so these issues can no longer exist.”