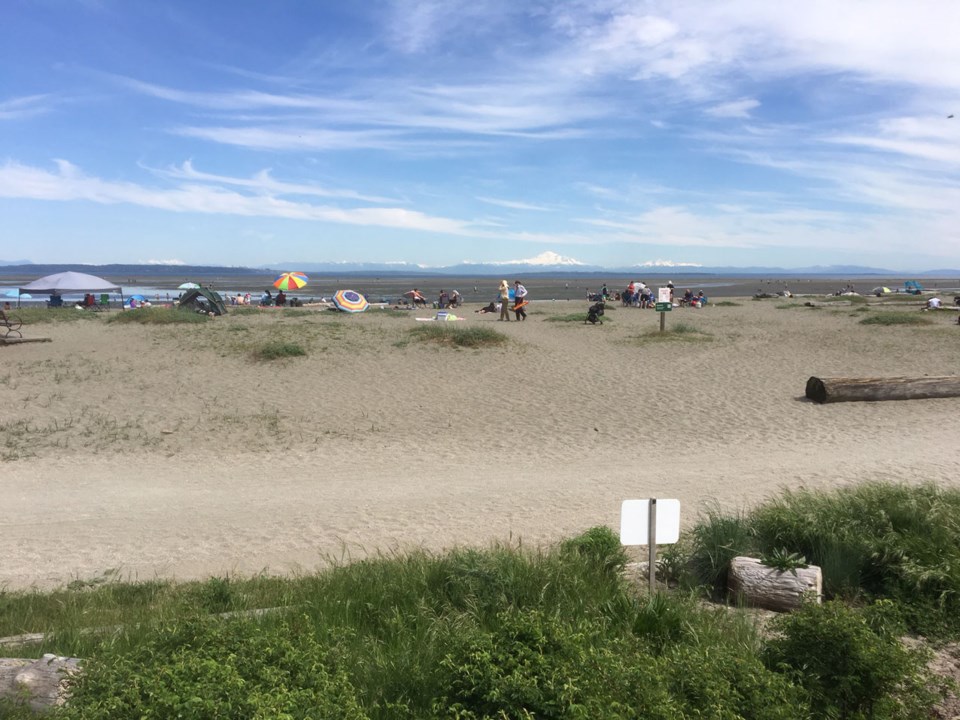 The alleged incident, which came to the attention of the Optimist, after a video was posted Wednesday afternoon in a private Facebook group, shows a verbal exchange between Lorraine Dubord and two of the alleged victim’s friends after the alleged altercation took place following a socially-distanced picnic at Centennial Beach several weeks ago.

Kiran Sidhu, a Surrey resident and teacher in the Richmond school district, left the gathering before the event was over. Unfamiliar with the beach area and exit, and with the tide coming in, Sidu said she was forced to climb onto some rocks to get to where her car was parked.

The rocks were along the residential property line of Dubord’s home. As she walked across the rocks, Dubord allegedly yelled at her to get down, but with the tide coming in, she was unable to do so.

“There was no way to get through with the tide coming in. Later a police officer told me the tides were 10 to 12 feet high,” recalled Sidhu. “There were four men who were ahead of me and they got through, so I thought I could get through as well. I started crawling, climbing the rocks and then this woman comes out from the home above me who I now know is Lorraine Dubord and she tells me to get down. I told her I was just trying to get back to my car and that there was no other way to get through…this was my only option.”

Sidhu said Dubord told her she should have been better prepared and ‘if I was as fat as you, I wouldn’t be at the beach.’

“I kept going, and I called her a ‘Karen’ and asked whether she was going to call the police. She started it and I’m not one to be a victim of abuse from anyone,” Sidhu said. “I almost slipped at one point, and she said it would be so funny if you fell. I swore at her again and she said she would spray me with her hose.”

Sidhu said Dubord then allegedly returned a minute or so later spraying her with a garden hose.

Sidhu said she came forward with her story because she feels nothing like this should happen to anyone.

“I’m someone with agency and my own power and knowhow and if I don’t bring this to light, who will,” she said.

Sidhu added she filed a complaint with DPD, which prompted the department to ask for an independent investigation.

“I felt that was not just, so I filed a complaint and it was transferred to Surrey RCMP. Maybe there is still an opportunity to get justice here,” she added.

Lorraine Dubord provided the Optimist with a statement via email Thursday afternoon.

“I would like to apologize to the individual involved in the way the situation was handled at Centennial Beach three weeks ago. Everyone should feel welcomed and supported in our community,” stated Dubord. “I trust that all the facts and the complete story surrounding this regrettable incident will be gathered in due course through the ongoing and independent RCMP investigation.

“I would like to reaffirm my ongoing commitment to promoting diversity and fighting racism and hate in our community. I will continue to listen and learn from the discourse occurring in our community on this matter.”

Surrey RCMP Cpl. Joanie Sidhu confirmed with the Optimist that an investigation is underway.

“There is not much we can say at this time because the investigation is in progress,” said Sidhu. “What I can say is that the Delta Police Department did reach out to us and we are investigating the matter.”

“Because of where it is in the investigative process, there is very little we can say,” said Leykauf. “It is under review and is being investigated by Surrey RCMP. Because they are the investigative lead, they are in charge, so it would be very inappropriate for us to comment at all. We wouldn’t with any other file and we must follow the same processes now.”

Delta Mayor George Harvie, who is also chair of the Delta Police Board, said he is supportive of the decision of the Delta police to refer this matter to an independent agency.

“Without question there is systemic racism in our society. I fully recognize that as leaders we need to do more to combat racism, hatred and discrimination in our community.”