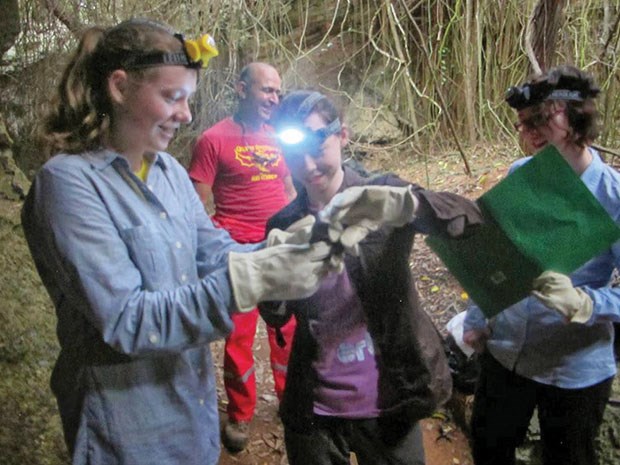 Sisters Rowan, Darsey and Cailean Meredith spent an atypical holiday in Varadero, Cuba last month. Rather than sunning themselves at one of the many all-inclusive resorts, the Merediths spent a week in and around the many caves assisting Canadian biologist Melissa Donelly and her Cuban colleagues in an ongoing bat conservation study.

It was youngest sister Cailean who initiated the girls' interest in the project. As a Grade 12 student at South Delta Secondary who will be studying biodiversity at Drexel University in September, she was looking for a way to gain hands-on experience in animal conservation as a part of her high school curriculum.

She was fortunate to gain the support of local teacher Monica Burnett and UBC professor Alice Cassidy in putting together an independent directed study as one of her Grade 12 classes.

AEI works with community-based groups to match volunteers to projects that help animals. Of the many projects AEI supports, the Cuban one most interested

Sisters Rowan and Darsey decided the timing was perfect for them to participate as well as they each finished university exams just before the trip.

In interviewing each of the sisters before placement, AEI co-ordinator Heather Reid remarked how exciting it was to have three siblings who all loved the idea of helping bats.

As team leader Donelly noted, "So many people fear bats because they mix myth with facts."

The result is that bat populations are especially vulnerable.

"When you have the chance to work with bats, and to see how incredibly tiny and delicate they are, it seems incredible that so many people react so negatively," said Cailean. "They are amazingly useful. The bats we worked with were all fruit eaters, and are very important in pollinating bananas and other food crops. And they're cute!" There are 28 species of bats in Cuba. The team found five of these species, all located within and around the small ecological preserve of Varahicacos where three of the caves are regularly visited by ecotourists.

The Merediths learned to set up mist nets, to handnet, and how to carefully handle and examine the bats, including tagging and taking measurements.

Donnelly notes, "The most exciting part of the whole trip was finding a single Macrotus waterhousii in a cave bordering on the construction site of an intended marina," according to Darsey. "The Macrotus waterhousii is an endangered species, and we hope that evidence we located of its use of that cave might help conservationists' efforts to protect additional habitat to ensure its survival."

As a reward for their hard work in the caves, the Merediths experienced two additional excursions that tourists to Cuba rarely enjoy: a tour through a portion of the enormous Cuevas de Bellamar cave complex and the connected community garden project, and a day trip led by a Cuban ornithologist to observe a wide array of birds, including the world's smallest bird.

AEI is recruiting volunteers for a June trip to the same area to continue the work. More information on this and other projects is available at www.animalexperienceinternational.com.